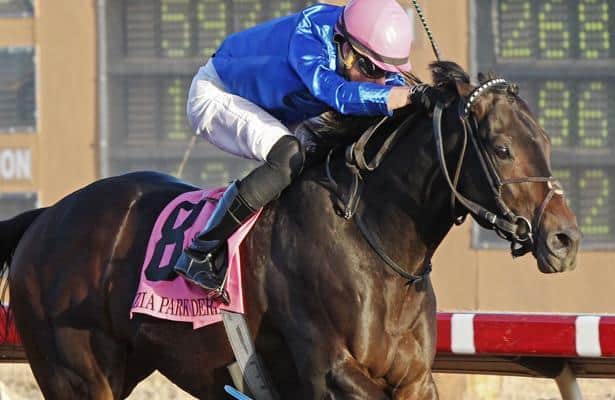 Making his stakes debut, Cedartown did his best running late in Wednesday’s $200,000 Zia Park Derby for what was an upset on paper — but makes plenty of sense when given a second look.

The son of Candy Ride was a $620,000 purchase last year, runs in the colors of Godolphin Racing and is trained by Mike Stidham.

“You dream of being able to ride for connections like this,” said jockey Ry Eikleberry, “so it’s a dream to be able to wear these silks and for this trainer. It’s a real honor.”

Reigning Oklahoma Derby winner Untrapped left the gate as a 3-5 favorite in the field of nine, down one following the scratch of morning line second choice You’re to Blame. While the Steve Asmussen trainee saved ground throughout, he was well behind Cedartown before hooking outside in the stretch to finish second.

Chief Know It All ran third in one of the features at Zia Park’s “Land of Enchantment” card. Earlier, the Asmussen-trained Iron Fist prevailed in the $150,000 Zia Park Championship Handicap. Sandy's Surprise took the richest race of the afternoon, the $300,000 Zia Park Oaks that served as the nightcap.

The colt sat third through an opening half mile in 47.67 seconds before making a three-wide move through the turn to take the lead.

“I watched his replays, and they gave me really good instructions,” Eikleberry said. “They said just get him away, be close and try not to get him covered up — keep him in the clear. That’s exactly what worked.”

A rival went by in the turn, Eikleberry added, when Cedartown “just showed his class and re-broke.”

Making his sixth start, the colt registered his third victory. His other finishes were all second-place efforts.