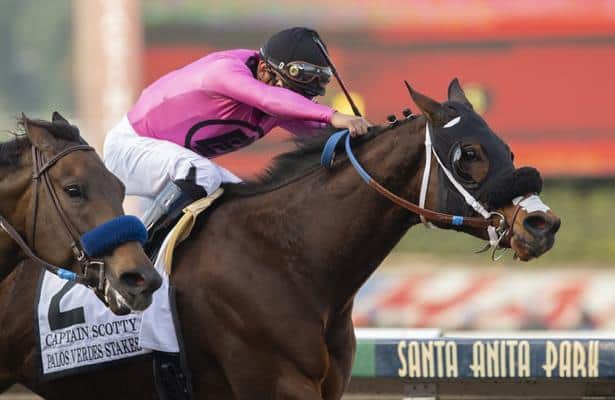 In a race reduced to four horses as the result of a pair of program scratches, trainer Peter Miller’s Captain Scotty went to the front and never looked back as he registered a neck victory over heavily favored Flagstaff in Santa Anita Park’s Grade 2, $200,000 Palos Verdes Stakes. Ridden to victory by Abel Cedillo, who recorded his third win on the day, Captain Scotty got six furlongs in 1:09.46.

With Ax Man scratched and scheduled to run in Sunday’s Clockers’ Corner Stakes on turf, Captain Scott broke running from the inside and carved out splits of 22.39, 45.22 and 56.87 as Flagstaff tracked him in second position. A quarter mile out, Victor Espinoza was asking Flagstaff to get on terms with Captain Scotty, but Cedillo had plenty left in the tank and was not headed until they hit the wire.

“Pete told me to try to go to the lead, when I saw the race was a two horse, two-speed type of race, I tried to slow it down,” said Cedillo, who had never ridden the 6-year-old Quality Road gelding.  “He was trying to run off, but I got him to relax pretty good and he finished pretty good.”

“We brought him back from Kentucky (after running third in a six furlong allowance at Churchill Downs on Nov. 28) and sent him to San Luis Rey Downs,” said Ruben Alvarado, assistant to Miller. “He came back in good shape and we decided to run him on the grass and the horse that won that day, (stablemate) Texas Wedge, came back to win today at Gulfstream, so he got beat by a good horse. He handled the grass okay, but not like the dirt, so we tried the main track today and we got lucky.”

Owned by Gary Barber and Wachtel Stable, Captain Scotty, who is out of the Aggressive Chief mare She Is Raging, registered his first graded stakes win today and improved his overall mark to 13: 4-4-2.  With the winner’s share of $120,000, he increased his earnings to $321,095.

Flagstaff broke alertly but was out-footed early and was a length off the winner at the quarter pole. With Espinoza doing his best, Flagstaff hit his best stride late and just missed in a big effort.  Off at 4-5, he finished six lengths clear of Speed Pass and paid $2.20 to show.

Cedillo rung up his fourth winner on the day in the ninth and final race and moved into a tie atop the rider standings with Joel Rosario, who was away to ride today at Gulfstream, with 16 wins each through 15 racing days.