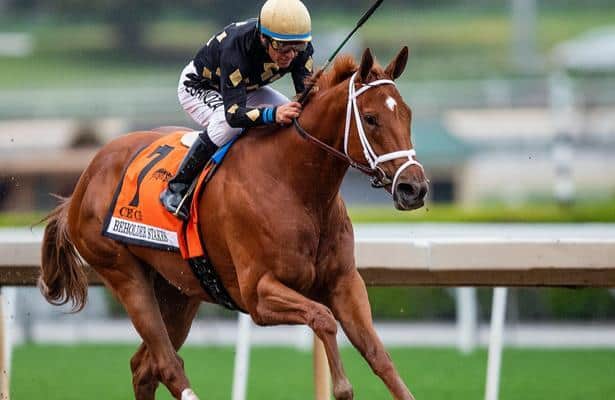 Trained by Michael McCarthy, Ce Ce, a 4-year-old daughter of Elusive Quality out of Hirsch’s Grade 1 stakes-winning Miss Houdini, Ce Ce has won all three of her 2020 starts, the most recent being a head victory in the Grade 1 Apple Blossom Handicap at Oaklawn Park April 18.

A well beaten second as the 3-5 favorite in her lone confrontation with Ce Ce here in the Grade 1 Beholder Mile on March 14, the John Shirreffs-trained Hard Not to Love will try to turn the tables as she seeks her sixth win from eight overall starts.

Bob Baffert’s Fighting Mad makes her second start off a layoff Sunday and should appreciate  stretching out off a solid effort in the Grade 3 Desert Stormer Stakes at six furlongs May 17.

Here's a closer look at the main players with the Santa Maria set as Race 7 at approximately 6:30 p.m. ET.

Immensely talented, she was sidelined following a fourth place finish in the Grade 1 Acorn Stakes at Belmont Park on June 8, 2019, and did not resurface until romping to a 4 1/4-length allowance score going 6 1/2 furlongs at odds of 1-2 here on Feb. 17.

Off at 4-1 in the Grade 1 Beholder Mile, she stalked Hard Not to Love early and took charge a quarter mile from home in a totally dominant 3 1/4-length victory. Pressed late by highly regarded Ollie’s Candy, she prevailed by a head at odds of 7-2 in the Grade 1 Apple Blossom April 18, a win that further validated McCarthy’s long-held belief that Ce Ce may indeed be something quite special.

With an overall mark of 6: 4-1-0, she has three wins from four tries at Santa Anita and has been ridden in all of her races by Victor Espinoza.

Although no match for Ce Ce in the Beholder Mile, there’s no doubting Hard Not to Love is a filly of considerable quality. With her success a true testament to the horsemanship of both Shirreffs and regular rider Mike Smith, this 4-year-old filly has had to overcome extreme anxiety, which is believed caused by the fact she lost the sight in her left eye due a paddock mishap as a youngster.

With consecutive win in the Grade 1 La Brea and Grade 2 Santa Monica Stakes to here credit, Hard Not to Love, in her first try around two turns, was seeking her fourth consecutive win in the Beholder Mile on March 14. Quite often a handful in the mornings and on game day, Hard Not to Love could be a little more settled as she goes to the Santa Maria gate on Sunday, as there will be no public admitted.

A 4-year-old daughter of New Years Day, she was bred in Kentucky by her owners and is out of the Forestry mare Smokey’s Love. In her first try around two turns, Fighting Mad led throughout and registered an eight length score as the 2-1 favorite in the Grade 3, one-mile Torrey Pines Stakes at Del Mar Aug. 17.

Sidelined following that, she was head and head to the top of the lane in the Grade 3 Desert Stormer on May 17, a race in which she tired to finish third, beaten 3 1/4 lengths by multiple graded winner Bellafina and was subsequently disqualified to fourth for interference. With three wins from six starts, she’ll be ridden for the first time by Abel Cedillo.