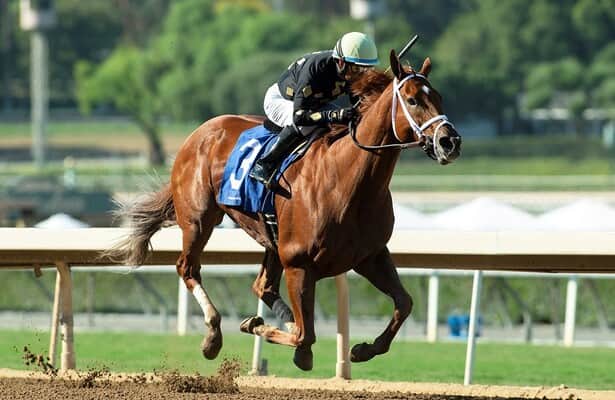 A joy to behold.

Ce Ce, the marvelous 6-year-old, Bo Hirsch homebred daughter of Elusive Quality, brought her A game on Sunday at Santa Anita, where she emphatically defended her title in the Grade 3, $100,000 Chillingworth Stakes.

Congratulations to owner, Bo Hirsch and all of the connections!

The Pick 4 starts next at Santa Anita! Play it at https://t.co/nBYFHj6ufh! pic.twitter.com/ncSJbGqcT1

She won by 2 1/4 lengths as her connections hoped for a repeat win as well in the Breeders’ Cup Filly & Mare Sprint at Keeneland on Nov. 5.

“I’m so excited to ride her for the second time in the Breeders’ Cup,” winning jockey Victor Espinoza said. “I was really proud of her and the way she ran today.”

Trained by Michael McCarthy, the reigning Eclipse champion female sprinter got 6 1/2 furlongs at 1:16.36.

In hand under Espinoza early, Ce Ce, who tracked Teddy’s Barino, Under the Stars and Scenic Masterpiece to the half-mile pole, was set down at the seven-sixteenths marker, angled four deep leaving the quarter pole and took command turning for home in a huge effort.

“She ran her race, and that’s all I want from her,” Espinoza said. “It doesn’t matter what happens during the race, as long as she can run her best, it’ll be good, and that’s what happened here today. She’s always good, she’s a pro. She can be a little picky, and when the track is not her thing, then she will not perform, like the last race in Saratoga.”

“I knew you could draw a line through that last one,” McCarthy said. “I think she is as good as she was last year. I knew that race at Saratoga was too bad to be true. She was going in good form. She was in the 1 hole, and she got dirt in her face. I know now why they call Saratoga the graveyard of champions. This was a good tune-up for the Breeders’ Cup.”

Under the Stars, the third choice under Juan Hernandez, kept to her task late and finished 3 1/2 lengths better than early leader Teddy’s Barino and paid $3.60 and $2.10 after going off at 9-2. The second choice at 3-1 with Mike Smith, Teddy’s Barino paid $2.10 to show.

#2 Midnight Memories wins the (GII) Zenyatta Stakes after a rough trip around the track. Back to back graded stakes victories!

Ridden by @JockeyRamonVazq, trained by @BobBaffert, and owned by Pegram, Watson or Weitman.

Trained by Bob Baffert, Midnight Memories got the 1 1/16 miles in 1:45.07 and will likely be pointed to the Breeders’ Cup Distaff on Nov. 5 at Keeneland.

Owned by Mike Pegram, Karl Watson and Paul Weitman, the 3-year-old filly by Mastery out of the Midnight Lute mare Tiz Midnight picked up $120,000 for the win, increasing her earnings to $286,680.

Head and head for the lead for most of the trip, Awake At Midnyte held the place under Mario Gutierrez, finishing a neck clear of an onrushing Empire House.

The Speakeasy, a Breeders’ Cup “win and you’re in” qualifier, thus provided Speed Boat Beach with a fees-paid berth into the Juvenile Turf Sprint at Keeneland on Nov. 4.

Hopping slightly at the break from his outside post position, Speed Boat Beach was quickly into stride, tracking long shot Helladic and Tyler Baze around the turn before taking shaking loose a sixteenth of a mile out.

Trained by John Sadler and ridden to perfection by Ramon Vazquez, Heywoods Beach got the trip in 2:31.98.

#3 Heywoods Beach wins Race 8, the Grade III Tokyo City Cup with @JockeyRamonVazq in the saddle! Congratulatons to the @johnwsadler barn!

With a backstretch start, Heywoods Beach was a joint third about 1 1/2 lengths off pacesetter Storm the Court under the wire the first time and in the run to the far turn.

Three furlongs from home, Vazquez slipped through at the rail, and Storm the Court drifted out a bit, Heywoods Beach was on terms with favored Tizamagician turning for home and gradually inched clear through the lane while holding off a late bid from long shot Win the Day.

Although well beaten on grass in the Del Mar Handicap (G2) on Sept. 3, Heywoods Beach defeated Tizamagician in winning the Cougar II (G3) at 1 1/2 miles on dirt two starts back on July 24.