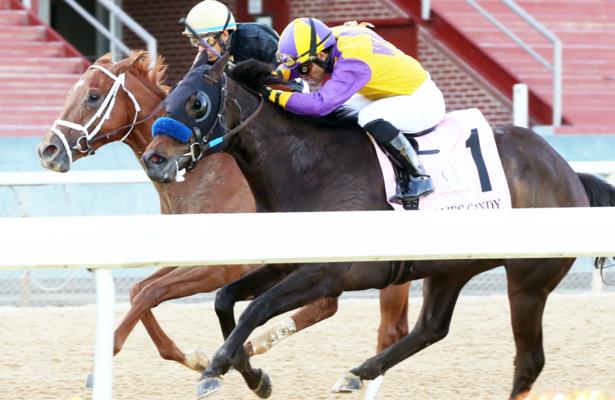 The 1 1/16-mile Santa Maria is under consideration for both Ce Ce and Ollie’s Candy six weeks after a head separated them when running one-two in a thrilling edition of the Apple Blossom Handicap (G1) at Oaklawn Park.

On Monday, the Santa Anita racing office listed Ce Ce as possible for the Santa Maria, while noting trainer Michael McCarthy had been in contact. There are no other graded stakes for older fillies and mares on the California schedule prior to the Clement L. Hirsch (G1) at Del Mar, her major summer goal.

As for Ollie’s Candy, she was entered in Monday’s Gamely Stakes (G1) on grass, but was scratched the morning of the race by trainer John Sadler. The conditioner told Horse Racing Nation after the scratch that Ollie’s Candy -- who bagged her Grade 1 win in last year’s Clement Hirsch -- would remain on dirt and Sunday’s Santa Maria was possible. Sadler also said the daughter of Candy Ride could wait for the Ogden Phipps Stakes (G1) at Belmont Park on June 13.

Also potentially looming for the Santa Maria is Grade 1 winner Hard Not to Love for trainer John Shirreffs. The one-eyed daughter of Hard Spun made her two-turn bow in the Beholder Mile (G1) last out when running second behind Ce Ce but in front of third-place finisher Ollie's Candy.

Santa Anita’s other stakes this week is Saturday's $100,000 Honeymoon Stakes (G3) for 3-year-olds going 1 1/8 miles on grass. Among the potential headliners in this heat are Stella Star for Sadler, Parkour for Hall of Fame trainer Richard Mandella and Laura’s Light from the Peter Miller barn.

Stella Star has been highly regarded by Sadler since she arrived at Santa Anita from France over the winter. The Irish-bred debuted in the one-mile China Doll on turf March 7 at Santa Anita, where she rallied from 12th to be beaten just a half-length by Warren’s Showtime.

Laura’s Light has been a productive filly for Miller and owner Gary Barber. She won on debut at Golden Gate Fields last year and came right back to be second in the Jimmy Durante (G3) before closing out her 2-year-old season with a win in the Blue Norther at Santa Anita. The daughter of Constitution opened this yer with a win in the Feb. 16 Sweet Life (G3) at Santa Anita, then most recently was fourth when shipped to Turfway Park for the Bourbonette Oaks on March 14.

Parkour is a lightly-raced filly with some intrigue. The LNJ Foxwoods homebred earned her diploma in her third start during last year’s Del Mar fall meet and came back to be fourth behind Laura's Light in the Blue Norther to close out her juvenile season.

By Carpe Diem, Parkour kicked off her sophomore campaign March 22 with a dominating 3 ¼-length allowance/optional claiming win going a mile at Santa Anita.