Ce Ce, Shedaresthedevil are ready for an Azeri showdown 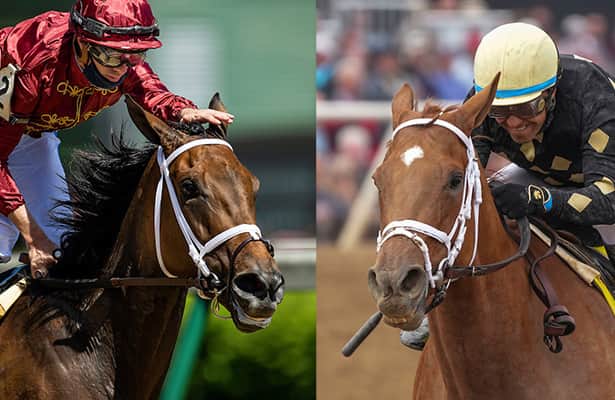 A champion and one with championship aspirations meet for the first time in the $350,000 Azeri Stakes (G2) for older fillies and mares Saturday at Oaklawn.

“Obviously, a couple of class fillies on the comeback,” McCarthy said. “Brad’s filly, Pauline’s Pearl, I thought she was pretty impressive when she won the Houston Ladies Classic. It’s a great field. I didn’t expect it to be easy. It’s a solid field, but I think she (Ce Ce) is the class of the field.”

Ce Ce returns to a two-turn race for the first time since finishing fourth in the $200,000 Santa Maria Stakes (G2) at 1 1/16 miles last May at Santa Anita. Ce Ce cut back to one-turn races following the Santa Maria and captured three stakes races, including the $1 million Breeders’ Cup Filly & Mare Sprint (G1) Nov. 6 at Del Mar to secure an Eclipse Award as the country’s champion female sprinter of 2021.

Ce Ce was nominated to the $500,000 Beholder Mile (G1) last Saturday at Santa Anita, but McCarthy opted to send the 6-year-old daughter of Elusive Quality back to Oaklawn. Ce Ce won the 2020 Beholder Mile and the Apple Blossom in her next start.

“I never ruled it (two turns) totally out of the question,” McCarthy said. “Obviously, Oaklawn’s a racetrack that she’s fond of. Thought something like this made sense.”

Program favorite Shedaresthedevil, who will be making her 2022 debut, was a finalist for champion 3-year-old filly of 2020 and champion older dirt female last year for co-owner Staton Flurry of Hot Springs.

Shedaresthedevil, in her 2021 debut, beat Letruska a head in the Azeri and scored two Grade 1 victories before concluding her campaign with a sixth-place finish in the $2 million Breeders’ Cup Distaff (G1) Nov. 6 at Del Mar after chasing a torrid pace. Shedaresthedevil has been based this year at Fair Grounds and her six published workouts leading up to the Azeri include a 6-furlong bullet (1:12.40) Feb. 27.

“I feel like she’s maybe a little bit tighter (than last year),” Cox said. “She wasn’t off quite as long. She didn’t miss any training. So, I feel pretty confident she’s as good this year as she was last year. It’s a good group of fillies, so we’re going to need to be. But she’s training good. She looks fantastic, so we’ll see how it goes.”

Shedaresthedevil came from off the pace to win Oaklawn’s $300,000 Honeybee Stakes (G3) for 3-year-old fillies at 1 1/16 miles in 2020 and was a wire-to-wire winner of the Azeri after breaking from post 5 in the five-horse field. Shedaresthedevil is drawn inside Super Quick, who has led at every point of call in her last three starts, Saturday.

“She’s able to set off,” Cox said, referring to Shedaresthedevil’s running style. “She doesn’t have to have the lead or anything. She broke incredibly sharp last year in the Azeri. So, just play the break and that will be up to Florent on where he feels she’s comfortable.”

Lady Mystify and Pauline’s Pearl were 1-2, respectively, in the $200,000 Remington Park Oaks (G3) at 1 1/16 miles Sept. 26 at Remington Park. Ava’s Grace returns to the barn of 2020 Oaklawn training champion Robertino Diodoro after finishing second in last year’s Fantasy in her two-turn debut.

She’s All Wolfe exits a runner-up finish in the $250,000 Bayakoa Stakes (G3) at 1 1/16 miles Feb. 12 for trainer Donnie K. Von Hemel. Bayakoa winner Miss Bigly returned to run second in the Beholder Mile. The Bayakoa is Oaklawn’s second of three preps for the Apple Blossom.

*Rating is based on HRN fan votes, which rank the Top Active Horses in training.
Shedaresthedevil Ce Ce Azeri Azeri (2022)