Cazadero, winner of the Bashford Manor, faces 10 in Saratoga Special 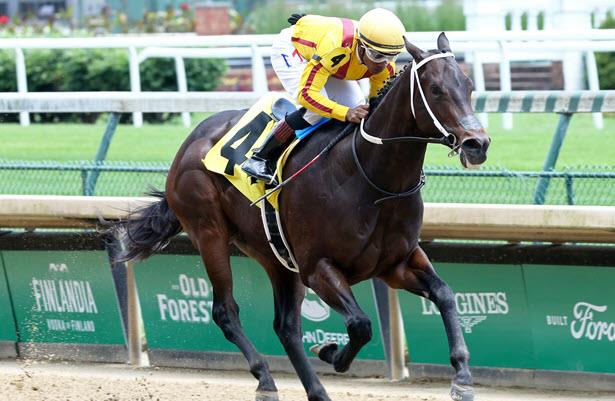 A field of 11 juveniles will look to make their star turn in Friday's 114th running of the Grade 2, $150,000 Saratoga Special presented by Miller Lite going six furlongs over the main track at Saratoga Race Course.

Rich in history, the Saratoga Special been a launching pad for eventual champion horses dating all the way back to 1907 when Hall of Famer Colin won the event en route to an undefeated 15-for-15 career. In 1914, Regret won the Saratoga Special before becoming the first filly to win the Kentucky Derby the following year. Other prominent winners of the historic race include champions Morvich (1921), Blue Larkspur (1928), Top Flight (1931), Whirlaway (1941), Native Dancer (1952), Nearctic (1956), Bold Forbes (1975), Conquistador Cielo (1981), and Favorite Trick (1997).

Hall of Fame trainer Steve Asmussen will attempt five victories in the Saratoga Special when saddling Cazadero, who is the lone starter in the field with a graded stakes triumph.

Owned and bred by Barbara Banke's Stonestreet Stables, the bay son of Street Sense won the Grade 3 Bashford Manor on June 27 at Churchill Downs in his most recent start, which came after an 8 ¾-length romp on debut at the Louisville oval.

Cazadero has gotten acclimated to the Oklahoma training track, recording three works including a three-eighths bullet in 37.60 seconds on August 2.

Asmussen and Stonestreet teamed up to win the 2010 Saratoga Special with Kantharos, who also entered the race off a first-out Churchill maiden win followed by the Bashford Manor.

"Its nice to have a couple of races under his belt heading into a race like this at Saratoga," said Asmussen's chief assistant Scott Blasi. "He came in very well-respected and hasn't done anything wrong yet."

Jockey Ricardo Santana, Jr. will retain the mount from post 6.

Asmussen also will saddle Jackie's Warrior, a bay son of Maclean's Music who won on debut on June 19 at Churchill Downs defeating next out winner and fellow Saratoga Special aspirant Therideofalifetime.

Owned by J. Kirk Robison, Jackie's Warrior registered an 81 Beyer for the effort, the same number that stablemate Cazadero recorded in his career debut.

"It was a very impressive maiden special weight at Churchill. Fast times and talented horses as well," Blasi said. "With these babies you just have to get some experience in them and hope that they continue to move forward."

Trainer Christophe Clement will attempt a seventh stakes win of the meet when saddling Momos for Ironhorse Racing Stable and Secure Investments.

The son of Distorted Humor was an impressive 6 ½-length winner in his Saratoga career debut on July 18.

"He's coming back a little quick with three weeks in between races," Clement said. "I could have trained for the [Grade 1, $250,000 Runhappy] Hopeful [on September 7] going seven-eighths at the end of the meet, but this is the best of the choices, so to speak. I just would like to keep him going short in a stakes on dirt and this was the logical one. He seems to be very fast, so why change something that is working?"

Stephen Fidel's Therideofalifetime boasts the highest career speed figure when registering an 85 Beyer in his second start when romping to an 8 ¼-length win at Keeneland on July 11.

Trained by Ignacio Correas IV, the chestnut colt is by Candy Ride and the first progeny out of the stakes-winning Proud Citizen broodmare Cosmic Evolution.

Breeze Easy's Roderick will attempt to mimic a sensational 8 ¼-length win on debut as he breaks from the far outside for trainer Wesley Ward.

The son of Into Mischief garnered a 73 Beyer for the win in the five-furlong maiden on June 21 Belmont Park, where he defeated next-out winner Zippy Baby.

A $550,000 purchase from last year's Keeneland September Yearling Sale, Roderick is out of the Cherokee Run mare Cayala and is a full-sister to graded stakes winner One Liner. He comes from the same family as Grade 1 winners Daredevil and Albertus Maximus.

Trainer Antonio Sano sent out eventual multimillionaire Gunnevera to a 2016 Saratoga Special victory and will attempt to do the same with Magic Stables' Papetu, who breaks from post 1.

Like Sano's previous Saratoga Special winner, Papetu also is a chestnut son by Dialed In and arrives off a five-length maiden triumph at Gulfstream Park en route to an allowance optional claiming win on July 5 at the South Florida oval.

Papetu has trained forwardly heading into his graded stakes debut having recorded a half-mile drill over the main track at Gulfstream Park West in 47.60 seconds.