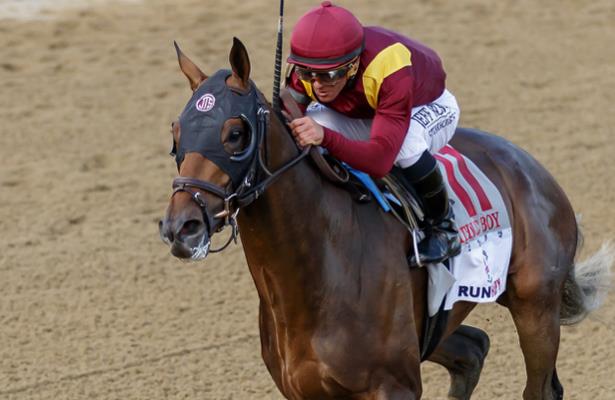 Trained by Jonathan Thomas, the 4-year-old More Than Ready bay won Grade 1 races on turf and dirt last year with scores in the Travers and Belmont Derby Invitational.

Thomas said Catholic Boy was full of energy on his return to turf following a string of dirt works at Saratoga and Belmont.

"He went a good half-mile," said Thomas. "I wanted to let him stretch his legs and I felt it was a really nice move. His energy level was great and they caught him in 47 and 3 which is a pretty stout work as the dogs were pretty far out."

Catholic Boy opened his 2019 campaign with a win in the Dixie (G2) at Pimlico and has not raced since finishing second last out in the Suburban (G2) on July 6 at Belmont.

Next, after bypassing the recent Kelso Handicap (G2), he has multi-surface options for the upcoming Breeders' Cup.

"We've had a couple of niggling issues -- nothing major. I'd hate to take him over feeling under prepared," said Thomas. "Sometimes, we're going to get beat under the best of circumstances, so we're taking our time. I feel he's been good the past couple of weeks and the work today was particularly good."

"We'll go week by week with him. Clearly, we'd love to be on target for a Breeders' Cup race but I don't know which race that would be yet," said Thomas. "I'm not sure if that's exactly the plan. If we can have some continuity in the next few weeks, I think it would put us in position to go to the Breeders' Cup.

"We'd more likely go to the Mile than the mile and a half [Breeders' Cup Turf]," added Thomas. "I think he has a propensity for speed and I'd rather cut back a little bit to the mile than take on mile and a half horses for the first time - especially, when it's versus the best in the world."

Thomas said the myriad of options for Catholic Boy is a welcome blessing.

"That's the cool thing about him. All three are races we could explore," said Thomas. "If the Classic is wide open, it's something we'd have to consider but there's also the Dirt Mile or the Mile on the grass. They're good options to have. We love his versatility and it's part of what's made him so special for everybody."