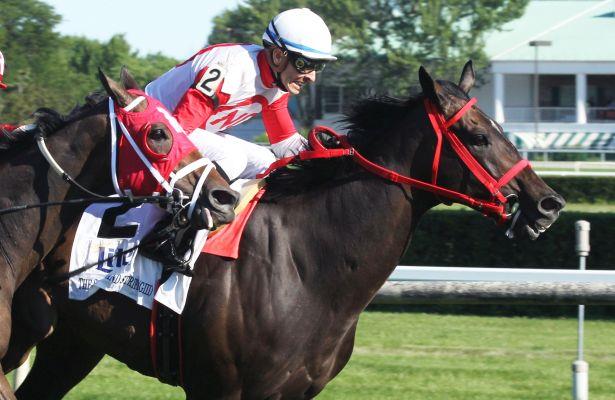 Catcho En Die (ARG) scored his first North American graded stakes victory in walk-the-dog fashion in the 87th running of the Grade III $100,000 Stars and Stripes at Arlington International Racecourse, which was contested at 1½ miles for 3-year-olds and upward over a firm turf course.

Owned by trainer Naipaul Chatterpaul in partnership with Sotirios Sakatis, the 6-year-old son of Catcher In The Rye (IRE) was sent straight to the front by Arlington’s leading rider Jose Valdivia, Jr. to produce fractions of 24.72, 49.72, 1:13.34, and 1:40.26 for the first mile. Coming around the far turn in 2:04.26, Ken and Sarah Ramsey’s Soglio began to inch his way closer to Catcho En Die but the Mike Maker trainee had to settle for third a neck behind Guy Pariente’s early trailer Canessar (FR), who made a big move up the rail in the stretch to finish second a neck behind the winner. Catcho En Die stopped the clock in a final time of 2:27.51.

Catcho En Die began his racing career in his native Argentina, where he was an undefeated three-for-three and won the 2016 Group 1 Miguel Alfredo Martinez de Hoz. He made his first start in the United States for Hall of Fame trainer Bill Mott in Dec. 2017, where he lost to two-time graded stakes winner March in a Gulfstream Park allowance optional claiming race. Two starts later he was claimed for $40,000 by Chatterpaul, who scored the second graded stakes victory of his career in the Stars and Stripes. He won the Grade I Manhattan Handicap with Mission Approved in 2011.

“I have no words to explain it, it’s the greatest feeling on earth,” said Chatterpaul. “That’s what I’ve been known for, claiming horses and bringing them up, and that’s what happened today. The horse is classy enough. I looked at the horse, I’ve been watching the horse for quite some time and you know I really take my time when claiming horses. He just seemed to have the perfect trip.”

“I had a lot of horse,” said Valdivia. “I took advantage of a paceless race, we had a great post and we didn’t have to run away from them too hard. Naipaul had the horse ready to rock ‘n roll and I knew this horse would stay on so the more challengers that kept coming on the inside, I said just let them eat our dust. Thanks Naipaul for the opportunity.”

While Valdivia took advance of the slow pace, Feargal Lynch, the jockey of runner-up Canessar, was hoping for a quicker one.

“It’s just a shame about the pace of the race,” Lynch said of the Arnaud Delacour trainee. “I was expecting a bit more pace and there wasn’t. They were going very slow. We tried to sit a little closer today. He’s a nice horse.”

Jose Lezcano – the jockey aboard Soglio – was gracious in defeat.

“He ran a good race,” Lezcano said. “I followed (Catcho En Die) the whole way but he just kept on running.”

A Stars and Stripes victory added $56,400 to Catcho En Die’s bankroll which enhanced his lifetime earnings to $205,054. It was his fifth victory in nine career starts.