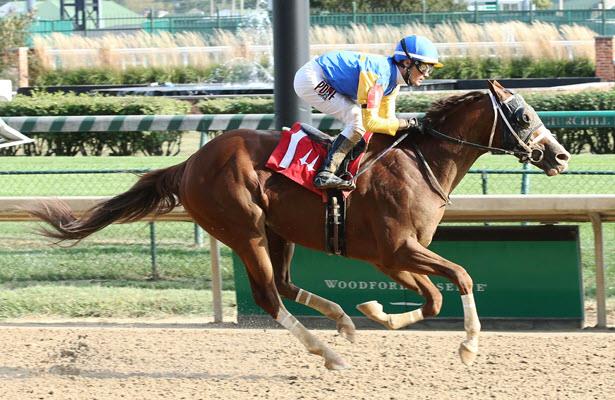 Veteran trainer Wayne Catalano exuded passion and animation when he described Susan Moulton’s three-time winner Manny Wah as the now 4-year-old colt will get his chance to breakthrough in stakes competition in Saturday’s $100,000 Aristides.

“I think he deserves a shot against these horses,” said Catalano, who scratched Manny Wah from an allowance event last Thursday in favor of Saturday’s race. “He’s been right there knocking on the door against some really nice horses as a 3-year-old and this year down at Oaklawn.

"He ran third behind two quality horses, Whitmore and Flagstaff (in the Grade 3 Count Fleet). They’re not in this field but it showed (Manny Wah) can run right with those type of horses.”

Manny Wah drew the inside post in the compact field of six sprinters on Saturday’s six-furlong race. In 14 of Manny Wah’s 17 career starts, Catalano’s son-in-law Channing Hill was in the irons.

However, Hill was sidelined in mid-April due to a compression fracture in his lower back. Corey Lanerie will have the mount for Saturday’s Aristides.

“Channing is doing well. He’s at home and healing up,” Catalano said.

Manny Wah was installed at 8-1 on the morning line for the Aristides as he’ll face 9-5 favorite Bobby’s Wicked One, the winner of the Commonwealth (G3) at Keeneland, and up-and-coming sprinter Volatile.

“It’s a solid matchup on Saturday,” Catalano continued. “There are a lot of nice horses in this field. There were many nice horses in last week’s (allowance) race, too. You won’t find an easy spot.”

The veteran Catalano was born in New Orleans and began his career as a jockey in 1974. Throughout his 10-year career in the saddle, he recorded 1,792 victories before retiring due to chronic knee injuries.

“I still remember my first win and it was beneath those historic Twin Spires,” Catalano said. “It was on May 20, 197,4 on a horse named Hellfire. That’s where it all started.”

Upon his retirement from riding, Catalano quickly found success training.

Arguably one of Catalano’s most accomplished horses was 2006 Breeders' Cup Juvenile Fillies winner Dreaming of Anna. The 17-time winner died in 2018 and her last foal is in the care of Catalano at Churchill Downs: a 2-year-old colt by Declaration of War named Big Dreaming.

Saturday’s program at Churchill Downs also will feature the $100,000 Dogwood (G3), which is a prep race on the Road to the Kentucky Oaks. First post is 1 p.m.