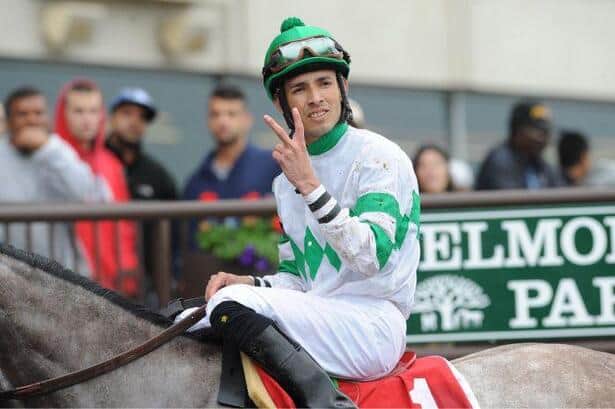 Winter Memories regained winning form in her 2012 debut, delivering a strong turn of foot after finding room at the top of the stretch to take the Grade 3, $150,000 Beaugay and give jockey Eddie Castro his 2,000th North American victory.

With Castro aboard for the first time in her career, Winter Memories raced in fourth behind fractions of 49.90 and 1:13.98, brushed with Check the Label while moving outside, and took off after getting the space she needed en route to a 2 ¼-length score over Gitchee Goomie.

“She relaxed fine in the beginning behind the other horses,” said Castro, a 27-year-old native of Panama who began riding in the United States in 2003. “I knew there was not too much speed, so I had to be right there. With no speed – the turf is really soft, too – I had to wait, wait. At the top of the stretch, the other horse pushed me in, but I pushed back a little bit. When she was clear and she could run, she took off.”

Winning trainer Jimmy Toner lauded Winter Memories and Castro for their performances in the Beaugay.

“She put in a really nice race,” said Toner. “She really did. You could see they were all just getting ready to box her in there, and [Castro] was patient. When they tried to push him back in, he came back out. Boy, he rode a beautiful race.”

Winter Memories, a 4-year-old daughter of El Prado, earned her fourth graded stakes win at Belmont and sixth overall and paid $3.90 for a $2 win wager as the 4-5 favorite. The Phillips Racing Partnership homebred completed 1 1/16 miles over yielding turf in 1:43.87.

The Beaugay was Winter Memories’ first start at Belmont since her dramatic neck win in September’s Grade 1 Garden City. She concluded her 2011 campaign with a fourth as the favorite in the Grade 1 Queen Elizabeth II Challenge Cup in October at Keeneland. Overall, she is 7-1-0 from 10 starts with $808,100 in earnings, including $90,000 for her Beaugay triumph.

Principal Role was third, followed by Federation, Check the Label, and Hessonite. La Cloche, who was coupled with Winter Memories, Check Point, and My Redbyrd were scratched.

Castro, third in the jockey standings at the recently concluded Aqueduct Racetrack spring meet, grew up on a farm riding horses and became interested in racing by watching compatriots such as Cornelio Velasquez. He attended his native country’s jockey school – now named after its most famous graduate, Laffit Pincay, Jr. – and won his first race there on December 6, 2002.

Castro registered his first North American victory aboard Diamond and Notes on April 23, 2003 at Gulfstream Park. He went on to win 241 more races that year and earned the 2003 Eclipse Award as the nation’s top apprentice jockey despite missing three months.

In 2005, he set a national record when he rode nine winners on a single card at Calder on June 4. Last year on the NYRA circuit, Castro finished sixth overall with 111 victories, including Grade 1 wins in the TVG Acorn and Coaching Club American Oaks aboard It’s Tricky and the Resorts World Casino New York City Wood Memorial with Toby’s Corner.