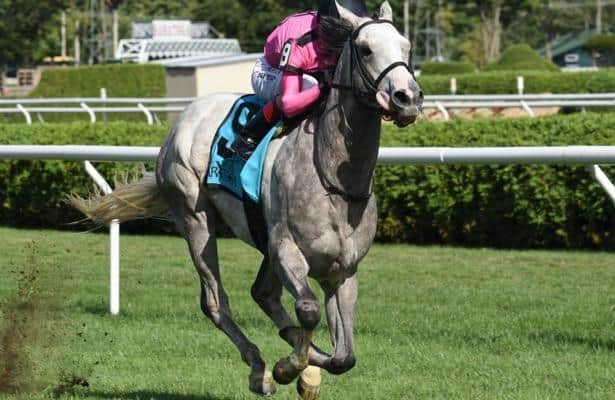 Trainer Mark Casse was delighted to see Jack and Noah display a swift turn of foot out of the gate and score his third stakes victory in Wednesday's Mahony against fellow sophomores on the grass, where he earned a 97 Beyer for the win.

Owned by Gary Barber, the French-bred son of Bated Breath made amends from his prior effort on opening weekend, where he was fifth as the beaten favorite in the Grade 3 Quick Call.

"What a difference a start makes,” Casse said. “He had so much trouble his first start there, so it was nice to see him back to his normal self.

A victory in the Mahony made Jack and Noah a stakes winner on turf at all three NYRA tracks. As a 2-year-old, he won the Atlantic Beach on Nov. 11 at Aqueduct two starts after a first-out maiden win. He earned his first win of the year against stakes company in the Sir Cat on June 19 at Belmont Park.

Casse, who earned his first victory of the meet with the son of Bated Breath, will likely race Jack and Noah against elders for his next start. He did not rule out an eventual start in the Breeders' Cup Turf Sprint on Nov. 7 at Keeneland but said that he would have to prove himself against older horses first.

Bred by Oceanic Bloodstock Inc. & Ariane Gravereaux, Jack and Noah is out of the Mizzen Mast mare Winter Count.