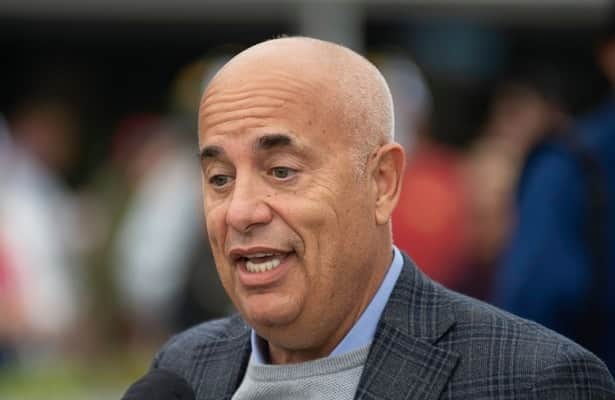 Trainer Mark Casse sent out back-to-back winners of the Woodbine Mile when Tepin turned the trick in 2016 and World Approval followed suit in the next renewal.

This year, Casse looked to have a leading contender in Filo Di Arianna, who was coming off impressive victories over the E.P. Taylor Turf Course in the Connaught Cup (G2) and the King Edward (G2).

“He came up with a minor injury,” said Casse, who is in the midst of a grueling run at the Keeneland September yearling sales. “The good news is we caught it very early. He’ll be just fine.”

And, with the Casse stable deep in quality, the trainer still has Get Smokin and March to the Arch for Saturday’s Grade 1, $1 million (about U.S. $754,000) feature which is a “win and You’re in” for the Breeders’ Cup Mile, a race which the trainer won with Tepin in 2015 and World Approval two years later.

Get Smokin is a relative newcomer to the Casse ranks and finished second to subsequent Grade 1 winner (and Woodbine Mile entrant) Shirl’s Speight in the Tampa Bay Stakes (G3) in his first outing for his new interests Feb. 5.

A journey to Dubai was next and is best forgotten.

“That didn’t go well from the start,” said Casse. “He didn’t really ship over very well. He just was never happy over there. He ran a clunker, but he came back and he’s run very well ever since.”

Since returning to North America, Get Smokin has been prominent in three outings with the most recent a fourth-place finish in the Fourstardave (G1) over one mile of Saratoga turf.

And while Get Smokin has done much of his running on the front end, Casse believes the 5-year-old gelding is adaptable.

“I think the race will set up nice for him,” said the trainer. “He’s going to be pretty close to the lead, but doesn’t have to be on the lead, and he got a good post (No. 8).”

March to the Arch, a 7-year-old gelding who will be making his third Woodbine Mile appearance, ended fourth last year after running second in the 2020 edition while coming off a victory in the King Edward.

After finishing second while making his local 2022 bow in the Connaught Cup, the Live Oak Plantation homebred was well-backed in the King Edward but finished fourth.

“For ‘March,’ it’s all about the turf,” said Casse. “I think his last race there was some give in the ground, and he just didn’t care much for it. He needs a hard turf, and pace. Give him those two things and he’s more than capable of getting it done.”

Casse also offered insight on his other stakes starters this Saturday at Woodbine.

“She ran so well her first start. We took her there (Saratoga), hoping that her form could transfer to the dirt. We kind of knew going in she had struggled a little bit with it. But we were there, we gave her a shot, and it just didn't work out. It didn't help that she got wiped out at the start.”

“I thought her last race (Catch a Glimpse) was very good. Patrick (jockey, Husbands) had to check her pretty good about the half-mile pole, and after the race he came back and kind of felt like that it would have been very close with him and the winner. I think the mile will be a plus.”

“I thought she ran well (second, Aug. 20). We think she’s pretty good. We’re high on her. She should improve from her first start."

“Both of them ran respectably, but they’re going to both have to improve. They very well could. They’ve got a race over the turf. That was a fairly competitive race. Both horses are training well. We need a little luck.”

“She's a really good filly. She could easily have won at Saratoga, in her last start. She’s shown nice form on this synthetic.”

“I thought Beyond Mybudget ran very well in her last start. We got a little unlucky here. Drew the one-hole, that's not ever good.”

“We just got that filly. We made a last-minute decision to run her here. We put her in an allowance race, and it didn’t fill. We were pretty impressed with her breeze the other day on the Tapeta, and we’re going to give her a shot.”