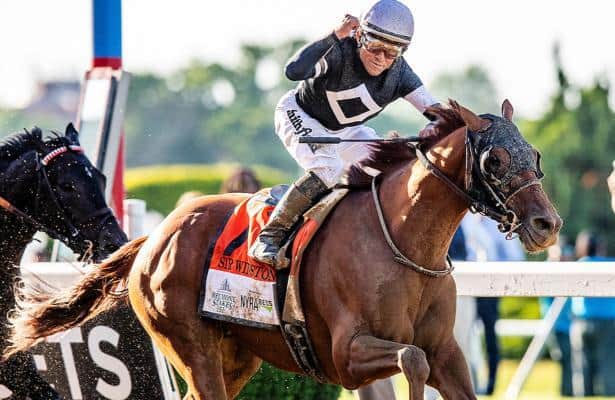 The Grade 1, $3 million Pegasus World Cup Invitational will have everything to do with time when it is run on Saturday at Gulfstream Park.

For defending champion and dedicated front-runner Knicks Go and his primary threat, speedster Life Is Good, can they produce a final time that will not run each of them into the ground by the end of a mile and an eighth?

For 6-year-old Sir Winston, one of the few contenders in the field of nine with the ability to remain within shouting distance, can he go back in time to regain the form he displayed when he edged Tacitus by one length in the 2019 Belmont Stakes? The chestnut son of Awesome Again went off at 14-1 that memorable afternoon at Belmont Park, when he relished the marathon mile-and-a-half distance of the final jewel of the Triple Crown and presented veteran owner Tracy Farmer with a stirring triumph. He is listed at 12-1 in the morning line for the 1 1/8-mile Pegasus as he attempts to add a second crowning achievement to an on-again, off-again career that has required great patience.

Trainer Mark Casse readily acknowledged that his willingness to take a shot with Sir Winston stems more from how he expects the Pegasus to unfold and, to a lesser degree, how well his horse is doing. The former Belmont champ will leave from post 6 with Edwin Gonzalez aboard. Knicks Go and Joel Rosario will break from the rail. Irad Ortiz Jr. will want to get away quickly from post 4 with Breeders’ Cup Dirt Mile winner Life Is Good.

“Our hope is that there will be a humongous pace,” Casse said, adding, “You know Knicks Go is going right to the lead. I’m sure Irad is going to sit just off of him.”

Knicks Go, recently celebrated as the world’s best racehorse, has been so fast so early in his races that he is accustomed to creating uncontested leads that set the stage for comfortable victories. That is exactly what happened when he was a geared-down 2 3/4-length victor against Jesus’ Team in last year’s Pegasus.

The rest of the field is counting on Life Is Good to exert a level of pressure the 5-year-old son of Paynter has never endured before in what will be the final start of his career for the Korea Racing Authority.

If Knicks Go and Life Is Good begin to wilt, an issue for Sir Winston might be whether the race is long enough for his closing kick to make a difference. “We kind of looked at this race for some time,” Casse said. “Obviously, we want a mile and an eighth. If it was further, that would be good for us. But a mile and an eighth is good.”

Sir Winston boasts six victories and four runner-up efforts for earnings of $1,189,873 in 19 career starts. He has been no worse than second in his last four starts, all of them coming on Woodbine’s synthetic surface. He won two of them, capturing an allowance optional claiming race at 1 1/16 miles on Aug. 19, 2021 in his first start since Sept. 1, 2020.

He remained at that distance when he placed second in the Durham Cup (G2) and the Autumn Stakes (G2). He clearly showed his preference for more ground when he concluded last season with a taut half-length victory in the Dec. 5 Valedictory Stakes (G3) at Woodbine.

As for the move from synthetic to dirt, Casse said, “I’m not worried about that part.” Sir Winston has worked well at Palm Meadows Training Center in Boynton Beach, Fla. He drilled four furlongs in a bullet 47.8 seconds, fastest of 46 horses at that distance on Jan. 20 in the latest of a series of five works there.

For a long time, that could not have been said about Sir Winston. When he journeyed to Dubai for the World Cup in 2020, not only was the race canceled a few days before it was scheduled to be run because of the pandemic, but the travel took an immense toll on him that ultimately led to a layoff of almost a year.

Another trainer might have crushed by that turn of events. Not the upbeat Casse.

“As much as we would have liked to run and as much as it hurt, there was so much pain in the world that I couldn’t let that bother me,” said Casse, a Hall of Famer with perspective.