Casse, Gaffalione team up for March to the Arch's Wise Dan score 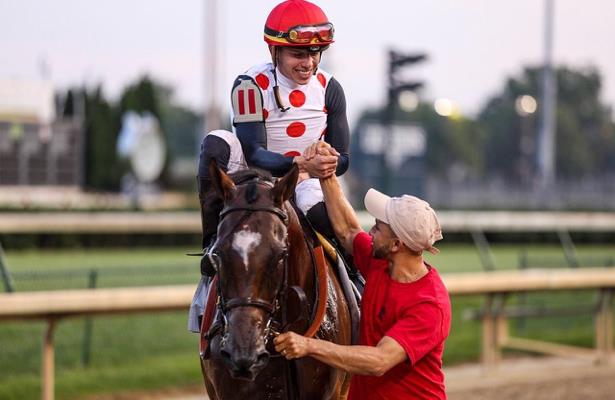 Mark Casse and Tyler Gaffalione – the trainer/jockey combo who won the Preakness Stakes last month with War of Will – teamed up again Saturday night to win the Grade 2, $250,000 Wise Dan Stakes with March to the Arch.

March to the Arch emerged from a stretch battle to win Churchill Downs’ 1 1/16-mile turf stakes for 3-year-olds and up. The Florida-bred 4-year-old gelding returned $23 on a $2 win ticket.

Campaigned by Live Oak Plantation, trained by Casse and piloted by Gaffalione, March to the Arch crossed in 1:40.58. All Right placed second, with post-time favorite Admission Office settling for third.

Admission Office, trained by Brian Lynch and ridden by Joel Rosario, charged hard in the late stretch but clipped the wire before he could pass the leaders.

“The trip set up beautifully,” Gaffalione said. “I was able to tuck in going into the first turn, saved all the ground around all the way around there and just followed (Parlor jockey Corey Lanerie) when he started to make his move and worked his way out.

“When I got him outside, he really exploded.”

March to the Arch has five wins in 13 career starts. The Wise Dan marked his first triumph in a graded stakes. Last out, the Arch son finished fifth on May 4 in the Turf Classic Stakes (G1) on the same ground at Churchill.

March to the Arch’s victory Saturday could set the gelding up for a shot Aug. 10 at Saratoga’s $500,000 Fourstardave Handicap (G1), a mile-long turf race for 3-year-olds and up.

“He probably could go for that,” assistant trainer David Carroll said. “That’s something we talked to Mark about.”

March To The Arch WINS the Wise Dan Stakes!

Join us on @NBCSN for more from Big Easy Night, with the Fleur de Lis and Stephen Foster: https://t.co/0yyPnLQPko pic.twitter.com/7d4ji1FfT8