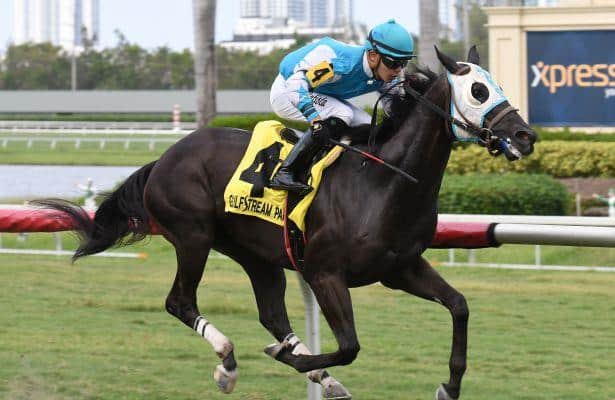 Extravagant Kid, one of the most accomplished turf sprinters in the country the past few years, will return to dirt Saturday, when the versatile 8-year-old gelding makes a title defense in the $75,000 Sunshine Sprint at Gulfstream Park.

The Sunshine Sprint, a six-furlong dash for 4-year-olds and up, is one of four stakes for Florida-breds on Saturday’s 12-race program with an 11:45 a.m. ET first-race post time. All four stakes will offer a $25,000 win-only bonus for Florida Sire Stakes-eligible starters.

Extravagant Kid, who was claimed by David Ross’ DAARS Inc. and trainer Brendan Walsh for $75,000 out of a Jan. 18, 2017, optional claiming allowance score at Gulfstream, captured last year’s Sunshine Sprint by 2 3/4 lengths.

“He’s been a fantastic horse right from when we got him. He hasn’t put a foot wrong at any point. His consistency speaks for itself. He was a great claim for Mr. (David) Ross,” Walsh said. “I was just looking at this form. It’s unbelievable. He very, very rarely doesn’t run up to par. I think there’s only one or two days where we leave disappointed. He’s been right there.”

Extravagant Kid, a Grade 1 stakes-placed son of Kiss the Kid, finished second back-to-back on turf in the Twin Spires Turf (G2) at Churchill Downs and the Woodford (G2) at Keeneland before finishing fourth in the Breeders’ Cup Turf Sprint (G1), in which he was beaten just over a length by victorious Glass Slippers, at Keeneland. He came back to finish a troubled second, beaten a head by Imprimis, in the Jan. 1 Janus, a five-furlong turf sprint, at Gulfstream. Last year, Extravagant Kid prepped for the Sunshine Sprint with a victory in the off-the-turf Janus.

“He won this race last year off a sharp race after winning the Janus, which we were just punched off in New Year’s Day. I know we got beat in the Janus, but we weren’t beaten that far. I hope we can follow up this year,” Walsh said. “The horse seems to have come out of the race good. He’s a horse that when he’s doing well, you run him, and he won’t let you down.”

While Walsh stated a belief that Extravagant Kid is slightly better on turf, he hardly lacks confidence when the veteran campaigner goes from turf to dirt.

“He’s been a pretty good dirt horse, as well. We went turf and Polytrack. It’s kept him around. He won this race last year with a little bit in hand. He also won a pretty good race in March 2019. He beat Firenze Fire in a Florida-bred stake at Tampa,” Walsh said. “He works all the time on dirt. We don’t work him much on grass.”

Tyler Gaffalione, who was aboard for his 2020 Sunshine Sprint win, has the call.

Live Oak Plantation’s Souper Stonehenge will enter the Sunshine Sprint off a second-place finish in the Nov. 21 Kennedy Road (G2) over Woodbine’s synthetic surface. The 5-year-old son of Speightstown finished 1 1/4 lengths behind stablemate Ride a Comet, who came back to win last weekend’s Tropical Park Turf (G3) at Gulfstream.

“The only thing he hasn’t show too much of a kindness for is turf, but in fairness to him, the last time I ran him on turf, it was his first start off a layoff,” Casse said.

Hall of Famer John Velazquez is scheduled to ride Souper Stonehenge for the first time Saturday.

My Purple Haze Stables LLC’s Heiressall is scheduled to clash with males in the Sunshine Sprint. The multiple stakes-winning daughter of Wildcat Heir is coming off a 3 1/4-length victory over older fillies and mares in a Florida-bred stakes at Tampa Bay Downs.

Terri Pompay-trained Heiressall, who won the Sheer Drama Stakes in her most recent start at Gulfstream, will be ridden by Edgard Zayas.

Michele and Lawrence Sargent’s Legal Deal and Tracy Pinchin’s Jackson, and Eric J. Wirth’s With Verve, who finished 1-2-3 in the Sunshine Sprint Preview at Gulfstream Park West, are slated to clash again Saturday.