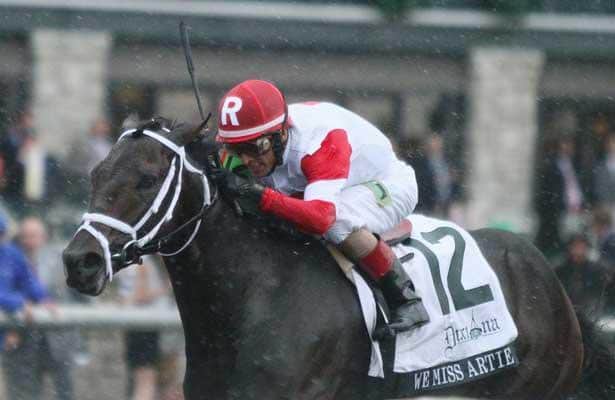 One of the supplementary nominations and a prime contender in the CashCall is Jungle Racing, Hollendorfer, Solis II et al’s Shared Belief, a convincing 7 3-4 length winner of the Grade III Hollywood Prevue Nov. 10.

The son of Candy Ride and the Storm Cat mare Common Hope was making his first start for Hall of Fame trainer Jerry Hollendorfer in the Prevue after being purchased privately following a handy victory Oct. 19 at Golden Gate Fields.  Corey Nakatani will again ride.

Hollendorfer also will be represented by Larry and Marianne Williams’ Tamarando, who closed from last Nov. 23 to win the $100,000 Real Quiet Stakes under leading rider Rafael Bejarano. The son of Bertrando displayed his class this summer with a victory in the Grade I Del Mar Futurity Sept. 4.  Bejarano has the return engagement.

Ken and Sarah Ramsey’s We Miss Artie (supplementary nom) will draw ample support.  The Artie Schiller colt had substantial trouble in the Breeders’ Cup Juvenile and in his previous start (Oct. 5) earned a Grade I victory in the Breeders’ Futurity at Keeneland.

Fog City Stable’s Tap It Rich, beaten 3 ¼ lengths in the Breeders’ Cup Juvenile in just his second start, will try to give Hall of Fame trainer Bob Baffert his seventh victory in the CashCall.  The gray son of Tapit worked a mile in 1:42 Dec. 2 and will have Hall of Fame jockey Mike Smith aboard.

Reddam Racing’s Bond Holder who edged both We Miss Artie and Tap It Rich in the Breeders’ Cup, became a Grade I winner when he pulled off a 10-1 surprise in the Front Runner Stakes Sept. 28 at Santa Anita.  Regular rider Mario Gutierrez has the mount for trainer Doug O’Neill.