Casa Creed wins the Fourstardave, earns a 3rd BC bid 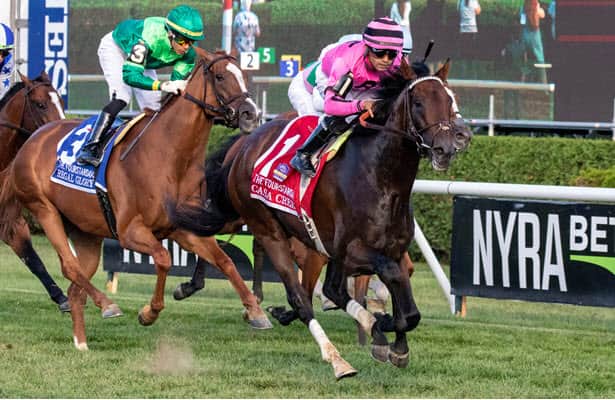 Trained by Hall of Famer Bill Mott, the 1 1/2-length victory provided the 6-year-old Jimmy Creed bay a “win and you’re in” berth to the Breeders’ Cup Mile in November at Keeneland.

Casa Creed, who had finished third in the previous two runnings of the Fourstardave, entered from a rallying half-length score in his successful title defense in the six-furlong Grade 1 Jaipur on June 11 at Belmont Park under returning rider Luis Saez.

Get Smokin was sent to the lead from the outermost post by Hall of Famer Javier Castellano and marked the opening quarter-mile in 24.01 seconds over the firm going with Masen tracking in second and 1-2 mutuel favorite Regal Glory in fourth to the outside of Front Run the Fed.

The Jose Ortiz-piloted Regal Glory, who was attempting to become the third female winner of the race in the last four years, advanced outside rivals midway through the final turn after a half-mile in 47.94 with Casa Creed following her move.

Regal Glory loomed large at the head of the lane but was unable to demonstrate her usual turn-of-foot as Casa Creed continued to find more and powered away to a convincing score in a final time of 1:34.20. Regal Glory completed the exacta by a half-length over her Chad Brown-trained stablemate Masen with Get Smokin and Front Run the Fed rounding out the order of finish.

Mott was full of praise for the measured trip by Saez.

“We kind of thought he’d be a little [closer], but he looked like he was where he wanted to be,” Mott said. “He let him break and the horse found his own spot. I don’t think he put him there, I think that’s the rhythm the horse wanted to be in and he gradually picked up the back as he went down the backside and got within striking range by the time he hit the half-mile pole. He waited very patiently – he didn’t tip him out way wide. He waited until he got around the turn and then tipped him out so he didn’t lose all the ground."

Mott said the victory laid to rest any misconceptions regarding shipping to the Middle East as Casa Creed is now 2-for-2 after finishing second in the Group 3 Turf Cup Sprint in February at King Abdulaziz Racecourse in Saudi Arabia and a close fifth in the Group 1 Al Quoz Sprint in March at Meydan Racecourse in the United Arab Emirates.

“He’s in great form and won two Grade 1s since coming back, so scrap that theory that they can’t travel and do good,” Mott said. “We’ve always felt he was capable of going a mile and I think it’s a matter of getting his run timed properly and having the right trip, and he did it today. He’s run good races at a mile before and got very good speed figures, and today he got his picture taken.”

It was the third Fourstardave score for Saez following past success with Grand Arch [2015] and Halladay [2020].

"It was a pretty good trip. That was the plan. We tried to break and settle down right there and have one move with him. He did it pretty great. He made a big move at the top of the stretch and came away with a victory,” said Saez, who was taking his fourth Spa stakes this meet, including wins with Fearless [Birdstone], Naughty Gal [Grade 3 Adirondack] and the aforementioned Art Collector.

Regal Glory, who entered with a perfect 3-for-3 record at the Spa, had won her previous four starts of which three came in Grade 1 company against her own kind. Masen made his Saratoga debut on a two-race win streak that included a last-out score in the one-mile Grade 3 Poker on June 18 at Belmont.

Brown said he was proud of the effort from his beaten favorite.

"She just looked like she was second-best today,” Brown said. “It was a bit of a wide trip but, you know, that's what it is, that's the way she likes to run clear though. Today, she just didn't have what it took to win. She ran really well in defeat. She did run second.

“I was disappointed he didn't kick on a little better,” added Brown regarding Masen. “He ran credibly but I just thought he would have a little more punch in the lane."