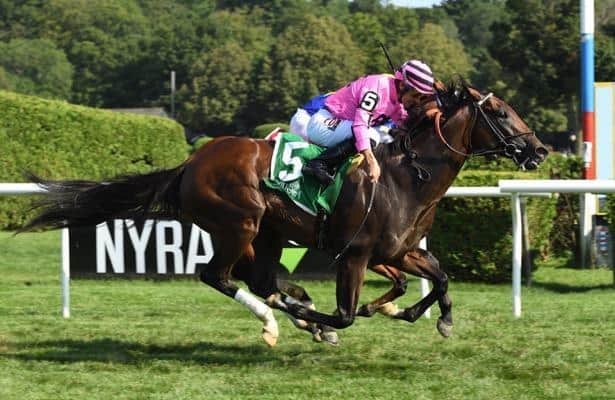 After coming up just short in three of his last four starts, Casa Creed finally got the better of a stretch duel Friday at Saratoga.

The 3-year-old Bill Mott trainee charged hard in the final furlong of the Grade 2, $200,000 National Museum of Racing Hall of Fame Stakes, beating Sombeyay by a head.

Casa Creed, who paid $6 to win, covered the mile over Saratoga’s inner turf in a blazing 1:33.71 for his first graded score.

Casa Creed’s victory capped a banner day for Mott, who saw one of his former stars, Royal Delta, inducted into the National Museum of Racing Hall of Fame earlier Friday.

Those close calls were sandwiched around a ninth-place run May 4 in Churchill Downs’ American Turf Stakes (G2).

The Todd Pletcher-trained Sombeyay stalked the pace setter, overtook him coming through the far turn and entered the stretch holding a lead.

That’s when Casa Creed kicked into gear, powering home on the outside of Sombeyay for a razor-thin victory.

Mott praised Casa Creed’s consistency through his recent outings and said the colt gave “a very game effort” to score his second win at Saratoga, where he broke his maiden last August.

“He really showed a lot of courage in the stretch,” Mott said.

“He ran great in a very difficult race,” owner Lee Einsidler said. “We felt that coming here today was a great opportunity for us and he’d have a big chance. He proved us right.

“I’m so looking forward to running him as a 4-year-old because he’s just getting bigger and better and progressing with every race.”