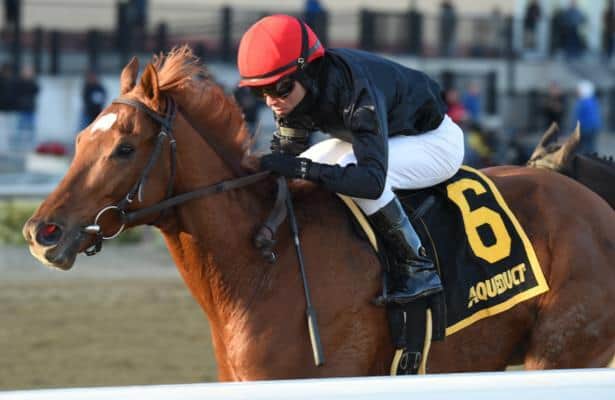 Saturday's $250,000 seven-furlong Carter Handicap is the first Grade 1 stakes race of the modified Belmont Park spring/summer meeting, and it attracted a deep field of 11.

With headliners Mind Control and Performer streaking into this spot, the Carter is also the first race offering a "Win and You're In" spot for the Nov. 7 Breeders' Cup Sprint at Keeneland.

Here is a full-field analysis of the Carter, which is slated as Race 9 of 11 with post time scheduled for 5:36 p.m. ET. Morning line odds are projected by Horse Racing Nation.

1) Firenze Fire [ML 9-2 – Poseidon’s Warrior – K. Breen/M. Franco – 24: 10-3-2 - $1,841,750] The leading money winner in the Carter is riding a three-race winning streak that includes a four-length victory at Laurel in the seven-furlong General George (G3) in February. Since then, the former Grade 1 winner was moved to the barn of Kelly Breen after the indictment of former trainer Jason Servis. His preferred running style as a pace presser allowed him to be competitive with second-place finishes last year against the best in the Sprint division – Mitole and Imperial Hint. He’s been training smartly at Belmont Park. Win contender.

2) Performer [ML 7-2 – Speightstown – C. McGaughey/J. Rosario – 5: 4-0-1 - $257,000] This Phipps Stable homebred won his last four starts, including his first stakes score in the Discovery Handicap (G3) at Aqueduct in November while pressing the pace. Even though his first two victories came sprinting, this seven-furlong test may not be the primary goal for trainer Shug McGaughey. Performer returns from a November layoff in what may amount to a prep race for future starts in the handicap division. Use underneath.

4) Nitrous [ML 20-1 – Tapit – S. Asmussen/J. Ortiz – 13: 3-1-1 - $429,746] This late-running son of Tapit has consistently faced top competition from the sprint division. He has two listed stakes victories and recently raced in only graded stakes. As a deep closer, he needs a fast pace setup that is not likely to happen in this spot. Toss.

5) Network Effect [ML 10-1 – Mark Valeski – C. Brown/I. Ortiz Jr. – 7: 3-3-0 - $252,910] With this one now 4, trainer Chad Brown has settled on one-turn racing for this colt who spent some time on the Kentucky Derby trail back in 2018. He won both his starts at seven furlongs, including a Florida-bred stakes at Gulfstream Park and his career debut at Saratoga. Though the Carter distance may be his best, it is a tough spot to move back up in class. Toss.

6) Midnightcharly [ML 20-1 – Uptowncharlybrown – E. Coletti Jr./M. Sanchez – 15: 6-6-1 - $349,808] This Pennsylvania-bred ships up from Parx, where racing is still shut down. He is a consistent performer who hit the board in 13 of his 15 career starts and was last seen running second to Firenze Fire after a late closing move in a stake at Penn National in November. This will be his first try in a graded stakes race. Toss.

9) Majestic Dunhill [ML 30-1 – Majesticperfection – G. Weaver/R. Gutierrez – 16: 4-2-4 - $286,294] Starting with a positive note, he made his last seven starts going the Carter distance. However, the George Weaver runner last won a race back in 2018 when he rallied from far back to win a stake at Laurel. He came back from a long layoff to run third in an allowance at Gulfstream in April. Toss.

10) Mind Control [ML 5-2 – Stay Thirsty – G. Sacco/J. Velazquez – 12: 7-2-1 - $1,003,000] Mind Control shows three consecutive graded stakes victories coming into this race. Two of those wins came at seven furlongs, including last summer's Jerkens (G1) at Saratoga. He has shown determination and the ability to overcome adversity throughout his career whether after a troubled trip or a poor start. Two of his recent wins came by a nose, and his fitness could be better Saturday. Top Choice.

11) Vekoma [ML 3-1 – Candy Ride (ARG) – G. Weaver/Javier Castellano – 6: 4-0-1 - $833,025] The 2019 Blue Grass (G2) winner went on to run 13th in the Kentucky Derby. He was then off for almost a year due to some physical setbacks before he returned to take the seven-furlong Sir Shackleton at Gulfstream Park with an impressive stalking trip. Weaver keeps him around one turn here. Notably, Vekoma won his career debut sprinting at Belmont Park as a 2-year-old. Win contender.

Summary: Seven-furlong races tend to favor horses that run from off the pace, and this field is loaded with late runners. The Carter is actually lacking any significant early speed, which means we should expect a number of live contenders coming down the stretch.
That scenario favors Mind Control, who has consistently proven to be hard to beat in a battle at the finish. He has also overcome adversity several times in the past -- good to know in large field. Regular rider John Velazquez gets back on board at the horse’s favorite distance.
Majestic Dunhill Network Effect Bon Raison Nitrous American Anthem Still Having Fun Vekoma Performer Firenze Fire Midnightcharly Mind Control Belmont Park Carter Handicap Carter Handicap (2020)