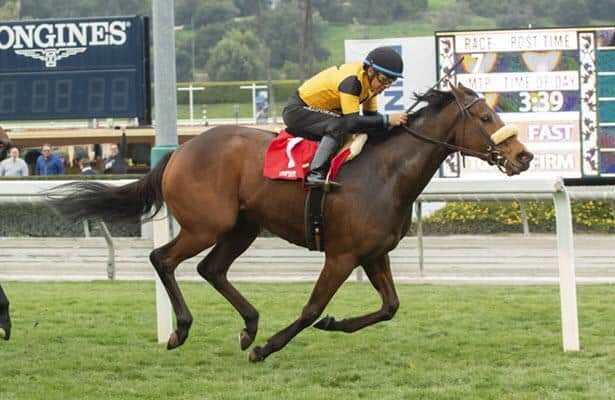 Ridden by Victor Espinoza, the 4-year-old daughter of Uncle Mo got one mile on turf in 1:34.64.

Breaking a bit tardily from the rail in a field of seven older fillies and mares, Carressa was a handful with Espinoza in the run to the first turn. In what proved a fortuitous decision, Espinoza opted to sit just in behind Brill and Keeper Ofthe Stars into the Club House turn. As the field straightened for the run to the far turn, Carressa appeared to settle and when she engaged favored Brill turning for home, she made the lead easily and kept Super Patriot and La Sardane at bay late for an impressive win.

“We didn’t know if she’d handle the turf, so I had two plans,” said Espinoza, who has now ridden her in her last four starts. “If she broke sharp, I’d go to the lead, but she kind of missed the break, so we sat behind. I wanted to keep her covered up going into the first turn because she was pulling pretty hard. When we turned up the backstretch, I moved her out and dropped my hands and she relaxed. At that point, I knew she was handling the turf and I really wasn’t worried about anyone else.”

#1 Caressa was much the best in the G3 Megahertz Stakes @SantaAnitaPark! Hall of Fame Jockey @VictorEspinoza aboard for Trainer John Shirreffs & @westpointtbred! pic.twitter.com/ItNcGuJ48k

“I’m really thrilled with her, the way she’s progressed and the way she ran today,” said Shirreffs.  “I thought the most important thing was when Victor was able to control her there going into the first turn. After that, she settled and really ran well.”

Owned by West Point Thoroughbreds and Mercedes Stable, Carressa, who is out of the Desert God mare Iplaytricks, has won three out of her last four starts and is now three for six overall, dating back to March 30, 2019. With the winner’s share of $60,000, she increased her earnings to $139,302.

Taken in hand early, California-bred Super Patriot had two horses beat after a quarter mile and rallied well to just collar La Sardane by a neck for second money. Off at 5-2 with Joel Rosario, Super Patriot paid $3.80 and $2.80.

La Sardane, who split horses turning for home under Flavien Prat, was off at 14-1 and paid $7.20 to show.