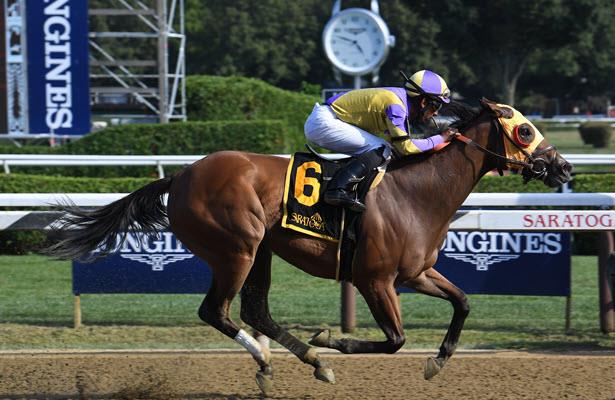 Stone Bridge Farm and Very Un Stable's Carrera Cat will come back to defend her title in Thursday's $85,000 Union Avenue, a seven-furlong handicap for New York-bred fillies and mares 3-years-old and upward at Saratoga Race Course.

Trained by John Morrison, the 5-year-old Courageous Cat mare was a late developer graduating at eighth asking in November 2018 at Aqueduct Racetrack, which launched a four-race win streak extending through a June 2019 allowance win at Belmont Park.

Following a runner-up effort last July in a key open optional-claiming sprint at the Spa, Carrera Cat overcame a troubled start to capture the Union Avenue by 2¼ lengths.

After finishing off-the-board in the final three starts of her 4-year-old campaign, Carrera Cat, bred in the Empire State by W.S. Farish, will look to fire Thursday off a nine-month layoff.

"She's doing fine,” Morrison said. “We actually had her ready to run when Belmont reopened but she got sick on us and we lost a couple of weeks.

"This race is the next natural spot for her, so we'll see how she does."

Kendrick Carmouche, who piloted Carrera Cat to a pair of rallying efforts on the turf during her 2-year-old year, will pick up the mount from post 5.

Morrison said Carmouche was reunited with Carrera Cat for two five-eighths works on the resurfaced Saratoga main track, including a bullet 1:00.01 on July 25 and a 1:00.40 effort Aug. 2.

"Kendrick says she loves the track,” Morrison said. “She worked very nicely and I'm hoping it will translate to a good effort on Thursday.

"He actually rode her in her 2-year-old year, but she's a lot better physically now than when he used to ride her, so I wanted him to get familiar with her again."

"She's never really had to have the lead, she just has so much natural speed that she puts herself up there," Morrison said. "She won this race last year after breaking a step slow and she sat off the pace. In one of her recent works, Kendrick sat off a horse until the eighth pole and then went on by. I think she's ratable. I don't think she has to have the lead."

Gary Broad's Ratajkowski, a 6-year-old Drosselmeyer chestnut transferred to the care of Graham Motion for her 2020 campaign, has won 5-of-8 starts with purse earnings of $369,490.

The frontrunning mare boasts wins from six furlongs to 1 1/8-miles and will cut back in distance from a neck score over Union Avenue rival Mrs. Orb in the one-turn mile Critical Eye on June 18 at Belmont in her seasonal debut.

Ratajkowski put together a three-race win streak last fall for former trainer Brian Lynch that concluded with a head win in the one-mile Empire Distaff Handicap at Belmont. She completed her 5-year-old season in November with a fourth in the Grade 2 Fall City Handicap at Churchill Downs.

Jose Ortiz will pilot Ratajkowski, assigned a field-high 124 pounds, from the inside post.

Beach Haven Thoroughbreds' Newly Minted, a Central Banker bay trained by Linda Rice, will return off a five-month layoff from a runner-up effort in the one-mile Heavenly Prize Invitational at the Big A on March 8.

Bred by Chester and Mary R. Broman, the 4-year-old bay has left the gate as the mutuel favorite in all but her maiden voyage when 5¾ lengths the best in April 2019 at Aqueduct. The talented filly won 5-of-8 starts last season including a romping nine-length score in the nine-furlong Fleet Indian at the Spa. She will look for the first win of her 2020 campaign  under returning rider Jose Lezcano.

A dark bay daughter of Orb, bred by Rhapsody Farm, all five of Mrs. Orb's career wins have come at a distance of one mile or greater. Dylan Davis, aboard Mrs. Orb for her last seven starts, retains the mount form post 6.

The Union Avenue is slated as Race 9 on Thursday's 12-race card, which offers a first post of 12:50 p.m. EDT. Saratoga Live will present daily television coverage of the 40-day summer meet on FOX Sports and MSG Networks. For the complete Saratoga Live broadcast schedule, and additional programming information, visit https://www.nyra.com/saratoga/racing/tv-schedule.