Caroline Thomas Returns in The Very One 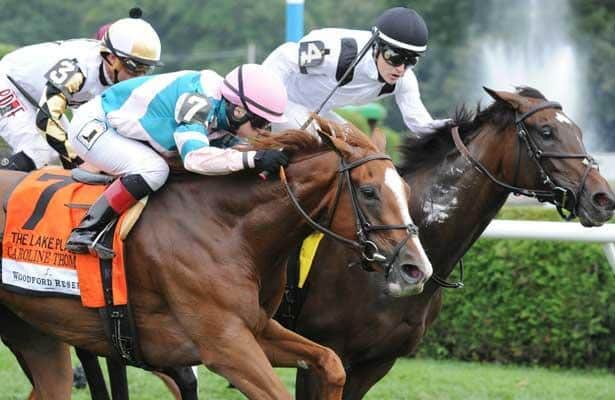 At the end of her 4-year-old season, Joyce B. Young’s Caroline Thomas already had the credentials to be an excellent broodmare prospect. A daughter of prominent sire Giant’s Causeway and Grade 1 winner Bit of Whimsy, Young’s homebred had a graded stakes win to her credit and was Grade 1 stakes-placed.

But instead of sending her to the breeding shed, Young and trainer Barclay Tagg decided to run Caroline Thomas another season, and, although the mare did not register a stakes victory in 2014, Tagg thinks she has not yet reached her ceiling.

“I have a feeling that most fillies get better in their five and 6-year-old years,” Tagg said. “I’ve had a lot of luck with fillies as they’ve gotten older over the years, and I think [Caroline Thomas] is doing really well. I’m happy with her.”

As he should be. She may not have hit the wire first, but Tagg says Caroline Thomas ran “winning races” in her last two starts, when she was beaten less than a length in both the Glens Falls (G3) and Dowager stakes. In the Glens Falls at Saratoga in August, Caroline Thomas, three lengths behind in the stretch, launched a strong rally along the rail to be beaten just three-quarters of a length. Seven weeks later in the Dowager on Oct. 19, again with work to do and nowhere to go in the stretch, the chestnut showed up once more, flying late to just miss the win by a nose.

“She’s so consistent,” Tagg said. “She tries hard every time, really, really hard. She never gets beat very far. She’s always in the thick of it. What can you say? You can’t knock her. She runs a winning race every time as far as I’m concerned.”

Away from the races since the Dowager, Caroline Thomas has trained steadily for her 5-year-old debut at Tagg’s winter base at Palm Meadows. On Monday the winner of the 2013 Lake Placid Stakes (G2) turned in her final pre-race breeze, posting a bullet work on grass. She went five furlongs in 59.50, the best of 17 works at the distance.

“She’s doing very well,” Tagg said. “She’s very consistent. She looks good. She’s happy. She’s a female, so you just have to keep her happy and let her run.”

Caroline Thomas will face seven other runners in the $150,000 The Very One. The group includes the Christophe Clement-trained duo of Irish Mission and Tabreed (GB), the one-two finishers in the La Prevoyante (G3) at Gulfstream on Dec. 27. Both mares are scheduled to be bred in 2015; the La Prevoyante was tentatively scheduled to be their final starts, but after speaking with their respective owners, Clement elected to run them again.

The Bill Mott-trained Riposte (FR) enters the 1 3/8-mile The Very One on a three-race win streak, but the daughter of Dansili (GB) has not run since taking the New York Stakes (G2) at Belmont in June. The 5-year-old mare has yet to finish off the board in five starts since coming to the United States from Europe.

Also in the field is Kitten’s Point, who won the Astra Stakes at Santa Anita in her last start on Jan. 18. The Graham Motion trainee has never finished worse than second at Gulfstream. She was runner-up in last year’s Honey Fox (G2) and won the 2013 Herecomesthebride (G3). Always Kitten, Bitty Kitty, and Meri Shika (FR) round out the field.

St. George Stable’s Fascinante will put her winning streak on the line when she returns from a three-month layoff in Saturday’s Ladies’ Turf Sprint Stakes, a five-furlong dash for older fillies and mares.

The 5-year-old Fascinante, a daughter of Madaglia d’Oro, has won her last three races at three different racetracks, all while sprinting five furlongs on the grass. After holding off foes en route to scoring nearly identical ¾-length victories in allowances at Gulfstream Park and Laurel, the Kentucky-bred made her stakes debut in the $90,000 Sparkler Stakes at Gulfstream Park West on Nov. 1 and registered a commanding 3 ½-length triumph.

“After the last race, she was a little tired, so I decided to give her a couple months off,” Loza said. “Now she’s returned and doing good. This is the race for her to return. I’ve been pointing her to this race. It’s a nice race, and she has a very nice record, and I want to see a good race [from her].”

Fascinante had won four of her previous five starts leading up to the Sparkler, all in wire-to-wire fashion. But when the gates opened on Nov. 1, the mare showed a new dimension, stalking rivals while just off the pace. Loza would like his trainee to get a similar trip in the Ladies’ Turf Sprint.

“She has good early speed,” Loza said. “In a lot of her races, she always wanted to take the lead, but in her last race, we wanted to put her behind horses. In this race, if she breaks good and she can run the same way she ran the last race and run just behind the front-runners, that would be great, but she has to be close, because the race is only five furlongs.”

Good Deed also brings a winning streak into the Ladies’ Turf Sprint, having won her last two starts, most recently the Pan Zareta Stakes at Fair Grounds on Jan. 10. The 6-year-old mare has plenty of speed, having taken all nine of career victories while racing on the lead. The Steve Margolis trainee will ship in for this start from New Orleans.

After scratching from last week’s Hurricane Bertie (G3), Wildcat Lily will instead join the Ladies’ Turf Sprint field. The Rontos Racing Stable-owned mare dazzled in an allowance win at Gulfstream on Feb. 5, winning by 9 ½ lengths. The Ladies’ Turf Sprint will be just her second start on grass.