Carmouche's Derby 'dream come true': It's not about race 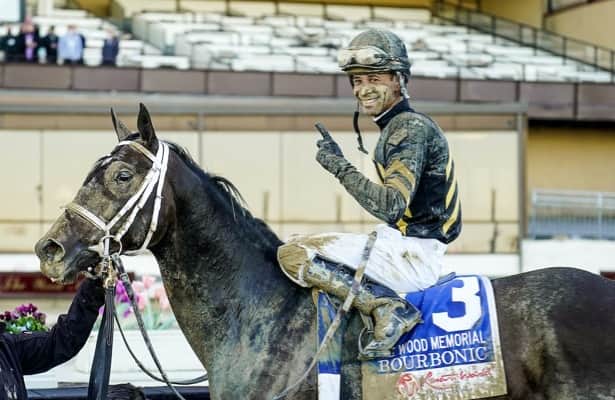 Photo: Dan Heary/Eclipse Sportswire
Tools & Tips to Win Big on Kentucky Derby 2021!
If Kendrick Carmouche should pull a stunning upset by guiding lightly regarded Bourbonic to a Kentucky Derby victory, he would make history as the first African-American jockey to bring home the roses since Jimmy Winkfield in 1902.

For anyone who knows Carmouche, that aspect will be the furthest thing from his mind when trainer Todd Pletcher gives him a leg up on the first Derby mount of his career.

The native of Vinton, La., wants the story of his admirable uphill climb to inspire people of all races.

“It just goes to show you if you work hard and respect everybody, you can be at any level you want, no matter what color you are,” he said.

Carmouche, 37, will be only the third African-American jockey to compete in the Derby since Winkfield prevailed with Alan-a-Dale in 1902. Marlon St. Julien ended a 79-year-drought in 2000 before Kevin Krigger came along in 2013.

Carmouche, who began competing in 2000, never will point to race to explain the years in which he struggled. He simply refuses to see the world that way.

“Kendrick wants to be recognized as a great jockey, regardless of what color he is,” said Kevin Bubser, his agent. “He doesn’t care if you’re black, white or Puerto Rican. Good jockeys are good jockeys.”

Carmouche does not blame anyone or anything for the years in which horses that had enough pedigree and talent to vie for a Derby spot were entrusted to others by owners and trainers.

When Whitney, his wife, was asked about possible racism in the sport, she replied, “For him, it truly hasn’t been a hindrance at all. But to say it’s non-existent is probably also not true.” Whitney is white.

Carmouche lives with the conviction that hard work solves everything. And for him, it has.

He prepared himself for greater challenges by paying his dues at Parx Racing in Bensalem, Pa. He captured seven riding titles there from 2008 to 2011, a torrid stretch that led to his induction into the track’s Hall of Fame in 2015.

That time prepared him for New York’s grand stage. There, he vied for top mounts with some of the finest riders in the world. Success came slowly – but he would not be denied.

He gained his first New York riding title last year by guiding home 23 winners during Aqueduct’s 18-day fall meet. He made another huge breakthrough last December when he savored his first Grade 1 win, accomplishing that with True Timber in the Cigar Mile. He had six Grade 2 scores to show for 20,376 previous starts.

And then there was the Wood Memorial (G2) and Calumet Farm’s Bourbonic, a horse dismissed at 72-1 that quickly retreated to the back of the pack once the Aqueduct starting gate snapped open. Carmouche persevered as he always has. The ground-saving trip he gave Bourbonic helped the colt stage a furious rally, edging stablemate Dynamic One. Both gained enough qualifying points to advance to the Derby and are among four starters for Pletcher.

“It means the world to me,” Carmouche said of his long-awaited Derby shot. “It’s my dream come true.”

Not surprisingly, the Derby represents another uphill climb. Bourbonic hardly fits the profile of a prime contender. He was available for $50,000 when he broke through in a Dec. 6 maiden claiming race at Aqueduct in his third career start. To make matters worse, he must break from the extreme outside post.

Nothing is going to keep Carmouche from treasuring his first Derby, from looking into the eyes of Whitney and their two children, Olivia and Kendrick, and understanding how much it means to them as well.

“I look at it that I’ve got a shot just as the favorite (undefeated 2-year-old champion Essential Quality) has a shot,” he said. “I’m riding to win.”