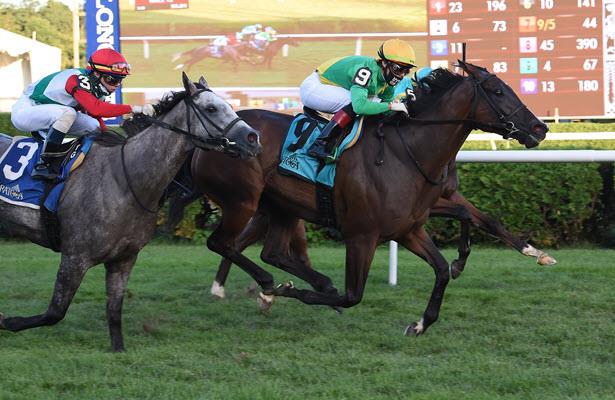 With Irad Ortiz, Jr. up, Cariba settled in fourth position as Luis Saez urged Jakarta to the lead through splits of 22.10 and 44.63 on the firm turf under pressure from Introduced with Dalika, the 9-5 favorite under Joel Rosario, racing in ninth.

Jakarta maintained a precarious lead through the turn with Getmotherarose threatening an inside run and Sweet Bye and Bye ranging up on the outside. Getmotherarose was stopped in traffic but Cariba, under urging from Ortiz, Jr., found another gear late in the lane and surged to victory in a final time of 1:01.53.

Jakarta held second by a head over Sweet Bye and Bye. Rounding out the order of finish was Introduced, Dalika, I'llhandalthecash, Miss Gossip, Mother Mother, Getmotherarose, and Saratoga Treasure.

Ortiz, Jr. said he followed the leading trainer's instructions to the letter.

"I got a perfect trip. I just followed the instructions. [Clement] told me to be third or fourth and don't be too far," said Ortiz, Jr., who won four races on Saturday's program. "The horse put me right there and when I tipped her out in the stretch, she had something left and finished up very well. She ran really good."

The French-born trainer said he asked Ortiz, Jr. to provide Cariba, making her stakes debut, with a close stalking trip.

"I thought there was two or three speeds and I didn't think we could be in the first two," said Clement. "I said to be aggressive and get a position third or fourth because we had a bad draw and you don't want to be caught in the back in traffic and everything. He gave her a perfect trip. It's always nice when it works out."

Bred in Kentucky by Brereton C. Jones, Cariba banked $110,000 in victory while improving her record to three wins and three seconds from eight starts. She paid $10.40 for a $2 win bet.