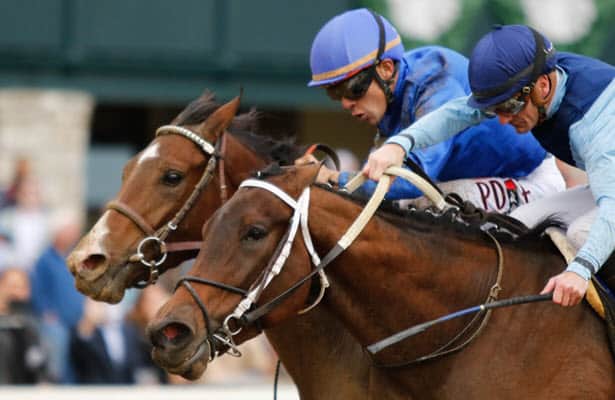 Caramel Swirl and jockey Junior Alvarado were content to sit near the rear of the 11-horse field as Joy's Rocket stalked the leaders while saving ground behind opening fractions of 22.66 and 45.89 for the seven-furlong trip. On the turn, Caramel Swirl was angled out widest of all for racing room and proceeded to join Joy's Rocket near the front as they were set down for the stretch drive. That pair surged past the field nearing the three-eighths pole and commenced a head-to-head battle to the wire with Caramel Swirl prevailing by a head.

“It was a great battle," Alvarado said. "They both are great fillies and neither of them wanted to lose the race. They were digging down to the wire.”

Added Rafael Bejarano, rider of Joy's Rocket, "“I was pretty much in front of the winner through the whole straight. She got the bob at the wire. My filly ran a big race. She was traveling very good for me and when I got clear in the stretch, she took off. It was an unlucky bob at the end. The fractions were decent. We were traveling pretty easy.”

Trained by Hall of Famer Bill Mott, Caramel Swirl was the 3-1 second choice behind stablemate and favorite Obligatory, who was never a factor. Caramel Swirl won in a final time of 1:23.42 and returned $8.60.

Cilla was third with 35-1 long shot Shalimar Gardens rounding out the superfecta.

By Union Rags out of the unraced Smart Strike mare Caramel Snap, Caramel Swirl earned a first career stakes win while upping her record to 9: 3-3-1. She broke her maiden by 10 lengths when seven furlongs at Keeneland in early April, then returned three weeks later to be seventh in the Eight Belles (G2) at Churchill Downs won by Obligatory.

Following a short break, she won a seven-furlong allowance at Saratoga in July and then was fourth in Aug. 27 Charles Town Oaks (G3) in her most recent start.

“It was a little tougher than when she won by 10 to break her maiden here, that was for sure," said Jimmy Bell, Godolphin president and racing manager. "But obviously with the step up in company and class – Junior  gave her a super ride. She showed true determination and grit and heart down the lane. Made it interesting, but we’re happy to be here in the winner’s circle.”