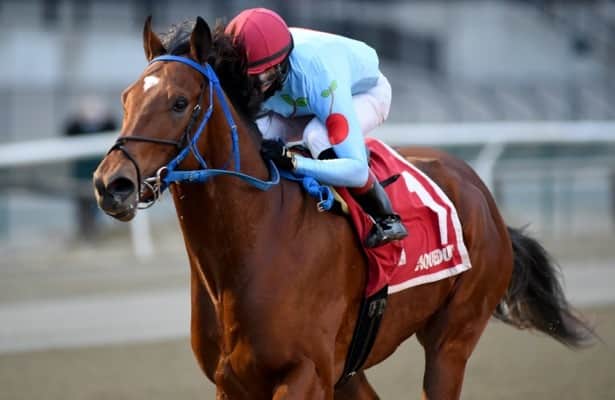 Capo Kane wandered his way from the rail to the middle of the track, while also wandering his way onto the Road to the 2021 Kentucky Derby leaderboard.

Under jockey Dylan Davis, Capo Kane broke well from the No. 1 post and kept a nose in front of 7-5 favorite Swill, also seeking the lead from post No. 2. Capo Kane set fractions of 23.53 and 47.83 along the rail while chased by Swill.

Coming through the turn, Eagle Orb moved forward from the outside to pressure the top two. Capo Kane stayed in the lead turning for home, drifting up the track but clear of both Swill and Eagle Orb.

While Capo Kane wandered into the five-path, he stayed well in front under right- and left-handed crops from Davis. He drove on to an authoritative win in his stakes debut.

“He broke sharp for me and I was able to take the lead very comfortably," Davis said. "He responded great all the way to the wire and I was very happy with the way he did it. He galloped out well. It was a very comfortable win and he handled the track real well.”

Harold Wyner trains Capo Kane, who improved to 2-for-3 lifetime. He finished second in his first start in October at Parx Racing, then broke his maiden a month later over the same Bensalem, Pa., oval.

Wyner noted that Capo Kane drifted out some at the head of the lane during his last race at Parx, just as he did in the Jerome.

In 2019, Wyner saddled Ny Traffic for the first four starts of his career, including in a 2-year-old stakes at Aqueduct. That colt moved into the barn last year of trainer Saffie Joseph Jr., for whom he started in the Kentucky Derby and Preakness Stakes.

"I think this is a Derby horse, too," Wyner said.

“I had a good trip," Eagle Orb jockey Manny Franco said. "I was right there, but I have to give credit to the winner. He’s a nice horse.”