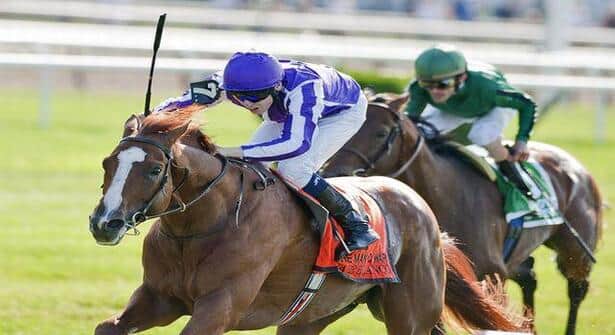 Irish-bred and European-based Cape Blanco owned by Mrs. Fitriani Hay, Derrick Smith, Mrs. John Magnier and Michael Tabor – and trained by Europe’s ubiquitous Aidan O’Brien – is still the projected long range favorite for the upcoming Arlington Million XXIX on Aug. 13, but Castleton Lyons’ Gio Ponti, who won the Million two years ago and could become only the second horse in history to win the Million twice, remains the one to beat.

Although Cape Blanco returned to his native Emerald Isle following his 2 1/4-length victory over Gio Ponti in Belmont’s Grade I Man o’War Stakes July 9, the 4-year-old colt is slated for a return to the United States for a trip to Chicago and the Grade I Arlington Million on the second Saturday in August.

Meanwhile, on this side of the Atlantic, Gio Ponti’s connections appear anxious for the rematch.  The 6-year-old entire son of Tale of the Cat breezed five furlongs in 59.22 over Saratoga’s Oklahoma turf course July 25 in his first move since his loss to Cape Blanco in the Man o’War.

“He looked very well,” Gio Ponti’s French-born trainer Christophe Clement said to the NYRA publicity staff after Monday’s move.  “He came back in good order and will work next Wednesday and we’ll go for the (Arlington) Million.”

Gio Ponti, who was beaten a half-length in last summer’s Million, is still in a position to join Dotsam Stable’s legendary John Henry as only the second horse to be credited with two Arlington Million wins.  Mrs. John Magnier’s Powerscourt, who won the 2005 Arlington Million, was also the first horse under the wire in the 2004 renewal, but was subsequently disqualified and placed fourth.

Other European invaders expected to join Cape Blanco for an assault on the Arlington Million are the Irish-bred Wigmore Hall, owned by Mark Hawtin, trained by Michael Bell and runner-up in last summer’s Grade I Secretariat Stakes here, and the French-bred Zack Hall, owned by Mathieu Offenstadt, trained by Mikel Delzangles and a competitive fourth in France’s Group I Grand Prix de Saint-Cloud at last asking on June 26.

Rahystrada, who won the Grade III Arlington Handicap in 2010 as the Million’s designed local prep and then was fourth in the Million, is owned by Robert Courtney Jr., trained by Scooter Hughes, and remains a strong threat among this summer’s American-based Million probable starters.  The 7-year-old altered son of Rahy worked a bullet five furlongs in 1:02.80 over muddy going at The Thoroughbred Center in central Kentucky July 23.

Shadwell Stable’s Tajaaweed, trained by Dan Peitz and sixth in last year’s Million but winner of the Grade III Arlington Handicap on Million Preview Day this year, is also on the list of the other stateside Million probable starters.  Tajaaweed breezed a half over Arlington’s Polytrack in 49.20 on July 23.