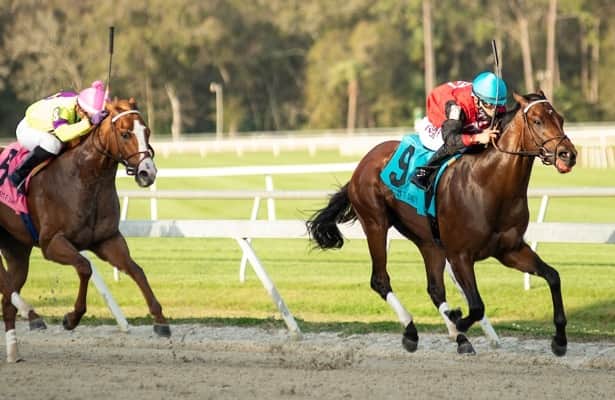 Candy Man Rocket, who burst onto the scene as a legitimate Triple Crown candidate by winning the Grade 3 Sam F. Davis Stakes here on Feb. 6, and Grade 3 winner Sittin On Go are expected to head a large field in Saturday’s Grade 2, $400,000 Tampa Bay Derby.

The 41st annual Tampa Bay Downs showcase is one of five stakes races scheduled on the Festival Day 41. The 1 1/16th-mile race for 3-year-olds on the main dirt track is a "Road to the Kentucky Derby" points race, with the top four finishers earning 50, 20, 10 and 5 points toward qualifying for a spot in the Run for the Roses starting gate at Churchill Downs on May 1.

As is always the case this time of year, the majority of attention will shift to the 3-year-old Kentucky Derby hopefuls.

Hall of Fame trainer Bill Mott – who won the 2019 Tampa Bay Derby with Tacitus and that year’s Kentucky Derby with Country House, with Tacitus finishing third – sent Candy Man Rocket out for a 4-furlong breeze today at his Payson Park Training Center base in Indiantown, Fla., where the Frank Fletcher Racing Operations-owned colt turned in a time of 48 3/5 seconds, the best of 36 workouts at the half-mile distance.

"He was on his own, he went well and I’m very pleased with him. He looked as smooth as silk," Mott said via telephone. "He is a good work horse anyway, but I liked the way he did it. The [Tampa Bay Derby] has been on our minds since he won the Sam F. Davis. Any time you get a horse that runs well over that racetrack, you have to give it consideration."

While Kentucky Derby qualifying points can be very crucial, Mott knows the important thing at this stage is to continue to build on the colt’s foundation for a possible try at a 1 1/4 miles at Churchill Downs.

"It seems like he is doing equally as well now as he was before the Davis,” Mott said. "He’s got good natural speed away from the gate, which can always be an advantage for any horse, position-wise. The chances of getting a good trip might be better than they would for a deep closer, especially in a big field."

Mott said the owner, Frank Fletcher, is excited about Candy Man Rocket’s chances to be the first horse to complete the Sam F. Davis-Tampa Bay Derby double since Destin in 2016. "He is someone who is enthusiastic about his horses, loves the game and is happy just to have a horse in a race like this," Mott said.

The trainer said he is still debating the next start for his Sam F. Davis runner-up, breeder-owner Michael Shanley’s Nova Rags, who won the Pasco Stakes here on Jan. 16. Mott said the Rebel Stakes (G2) at Oaklawn, the March 20 Louisiana Derby (G2) at Fair Grounds and the March 27 Florida Derby (G1) are all under consideration.

Sittin On Go, who won the Iroquois (G3) last September at Churchill Downs, is expected to make his first start since a sixth-place finish on Jan. 30 in the Holy Bull (G3) at Gulfstream Park. The Albaugh Family Stables-owned colt is trained by Dale Romans.

Trainer Todd Pletcher, who has won the Tampa Bay Derby a record five times, including three in a row from 2015-2017, is expected to return with Woodford Thoroughbreds and WinStar Farm’s Promise Keeper. The colt broke his maiden on Feb. 6 at Gulfstream in his second start, winning a mile maiden special weight race by 5 lengths on a sloppy track.

Mark Casse, who sent out Prospective to win the 2012 Tampa Bay Derby, is expected to enter D. J. Stable’s Helium. The colt was 2-for-2 as a 2-year-old, winning the 7-furlong Display Stakes on Oct. 18 on the all-weather synthetic Tapeta track at Woodbine in Toronto.

Other likely Tampa Bay Derby entrants include trainer Shawn H. Davis’s Hello Hot Rod, a winner of three of four lifetime starts, including the Jimmy Winkfield Stakes on Jan. 31 at Aqueduct; Moonlite Strike, trainer Saffie A. Joseph, Jr.’s colt who is 2-for-4; Joseph’s Super Strong, whose lone start on Dec. 19 at Camarero resulted in a victory in the Grade I Classico Agustin Mercado Revron Stakes; and My Liberty, a maiden winner from the barn of Maria Ines Mejia.

Tampa Bay Downs trainer Arnaud Delacour is expected to seek his first Hillsborough Stakes victory with lightly-raced 4-year-old Magic Attitude, a Great Britain-bred filly who won the Belmont Oaks Invitational (G1) on Sept. 19 in her first start in the United States. Magic Attitude, who is owned by Lael Stables, is unraced since finishing third on Oct. 10 at Keeneland in the Queen Elizabeth II Challenge Cup (G1).

The Florida Oaks, which was moved from the main track to the turf course in 2011, could represent another win opportunity for the Lael Stables-Delacour partnership in Be Sneaky, who finished second in the Suncoast Stakes here on Feb. 6. Be Sneaky would be making her first start on the turf.

Trainer H. Graham Motion, who won that first turf running of the Florida Oaks with Dynamic Holiday, is expected to have two runners, both 2-for-2 on the turf in their youthful careers. Gainesway Stable’s Oyster Box won an allowance/optional claiming race here on Jan. 6 in her most recent start, while Mia Martina, owned by Eclipse Thoroughbred Partners and Gianni Fittipaldi, did likewise four days later at Gulfstream.

Also expected for the Oaks are Starlight Racing’s Jouster, who has turned into a different sort after being switched to the turf two starts back by Pletcher, posting a pair of wire-to-wire victories; Forever Boss, who broke her maiden on Feb. 14 at Gulfstream via disqualification for trainer Ken McPeek; Queen of the Green, who won an allowance/optional claiming race here on Feb. 10 for conditioner Jon Arnett; and Por Que No, a two-time winner for trainer Kent Sweezey.

In the Challenger Stakes, 4-year-old colt Letmeno, trained by Ian Wilkes, is expected to seek his first stakes triumph after being disqualified from an apparent victory last summer in the Iowa Derby at Prairie Meadows.

Wilkes has fond memories of the Challenger. He won the race in 2012 with Janis Whitham’s 4-year-old Fort Larned, a result no one outside Tampa Bay Downs paid much attention to at the time. Fort Larned went on that season to win a pair of Grade 3 stakes, the Whitney Invitational Handicap (G1) at Saratoga and the Breeders’ Cup Classic at Santa Anita.

The Columbia Stakes is expected to draw at least 10 horses. The 3-year-old gelding Mira Mission, who has won two of three starts for trainer Thomas Bush, and trainer George Weaver’s Whatmakessammyrun are among the likely starters.along with the Mott-trained Crew Dragon and Pletcher’s Winfromwithin.

James B. Begg earned his first career training victory from his seventh start in the ninth race on the turf, winning with 4-year-old filly Stuy Town Baby. She is owned by C T R Stables and was ridden by Hector Diaz, Jr.