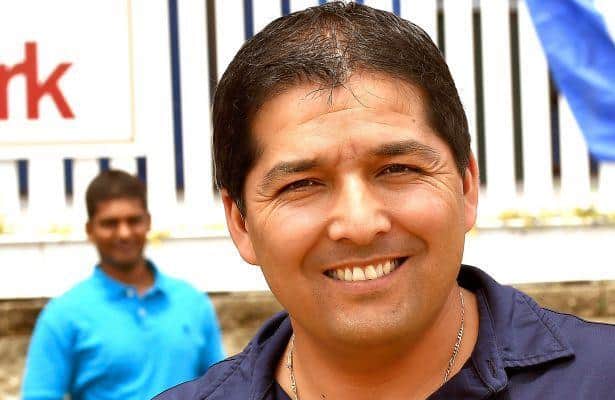 In just his sixth full season of training Thoroughbreds, Claudio Gonzalez never envisioned having the kind of success that has resulted his emergence as a dominant force in Maryland and has him a weekend away from formally claiming his fourth title in the last five Maryland Jockey Club meets.

Gonzalez, 41, enters the final three days of Laurel Park’s summer meet with 23 wins, nearly double that of Kieron Magee and Hamilton Smith, tied for second at 12 apiece. Gonzalez is also tops at the 40-day stand that wraps up Sunday with purse earnings of $504,273.

Soft-spoken, easy-going and always smiling, Gonzalez isn’t one to take his success for granted. Long before he ever won a race, he was already a winner at much higher stakes – beating cancer.

“For sure, it makes you appreciate what you have,” Gonzalez said. “You’re always working hard. This job is not easy, and every day is a new day. One day you might win three races, the next day you might not win any. You don’t know. You have to keep working hard every day.”

A native of Chile, Gonzalez was married with two young children and working as an exercise rider for trainer Ben Perkins Jr. at Monmouth Park when he was diagnosed with testicular cancer in 2008. He had surgery to remove a testicle and underwent chemotherapy, leaving him unable to work for six months.

In addition to the support he received from family and friends, Gonzalez is especially grateful for the compassion shown him by Perkins, who allowed Gonzalez to focus on his treatment and convalescence.

“At the time I was sick ... Ben told me, ‘No matter what, we’ll take care of you.’ He paid me every single week when I was out. There’s not too many people that would do that,” Gonzalez said. “He was there for me when I needed somebody. I owe my life, really, to Benny Perkins. If it wasn’t for him, I’m not here.”

Perkins, a multiple graded-stakes winner in Maryland including the Frank J. De Francis Memorial Dash in 2001 and 2004 when it was a Grade 1 event, said there was never a hesitation from he or his clients that they would step in to help Gonzalez.

“A lot of my owners are hands-on guys and they’re around the barn. A lot of them are people that had been with us for a while,” Perkins said. “They knew what Claudio was putting into the operation and they were all willing to help out when he needed help. It was a full group thing.

“Everybody pitched in,” he added. “The guys knew him and they knew the kind of person he was. He’s a good family man. He’s got a great wife and kids, and everybody was glad to help.”

For Gonzalez, it was the second time he had beaten the odds. The first came when he arrived in the U.S. in November 1995, a teenager without a job and hardly able to speak the language. He eventually found work galloping for Juan Serey, a fellow Chilean and the leading trainer in New Jersey at the time.

“Nobody in my family had anything to do with the horses. Only my uncle, who liked to bet the horses and would take me with him,” Gonzalez said. “When I saw the horses I decided I wanted to be a jockey. I started out trying to be a jockey, but I got too big. I ate too much.

“My father [Francisco] was in New York and brought me here. I went to see Juan at that time and he gave me the chance to gallop for him,” he added. “Because Juan is from Chile, too, people told me about him and I just went to him and asked if he had a job.”

Gonzalez stayed with Serey until 2002 and had a short stint under trainer Gary Contessa before landing with Perkins. Among the top horses that came along during their time together were multiple graded-stakes winners Wildcat Heir and Wild Gams, Grade 3 winner Max Forever and popular local 12-time stakes-winning millionaire Joey P.

“He always galloped Joey P. When he would say, ‘Joey’s ready,’ we knew he would win. Everybody knew and loved Joey P. around here,” Perkins said. “Looking back on it, some of the horses he got on for me he would say, ‘This horse is ready today,’ and he was always spot-on with his evaluation.

“Claudio’s just a super, super person. He’s a hard-working guy and he was an excellent rider. He always went the extra mile,” he added. “He wasn’t like, ‘OK, I’m done with my horses and I’m going home.’ He paid attention to everything going on and we had a lot of success with Claudio. You could see then he was interested in becoming a trainer, and he put in all the work necessary to do it.”

Gonzalez was still working for Perkins when he got his first horses, a small string he would tend to before and after his regular job. He won with his second career starter, Quiet Tiara, Nov. 14, 2012 at Laurel, earning his first stakes win the following September with Princess Perfect in Monmouth’s Jersey Girl Handicap.

“At the start when I was in New Jersey, I had five horses. At 3 o’clock I would take care of my horses over there and then at 5:30 I would go to Benny and gallop eight horses for him and then I came back to take care of my horses after that,” Gonzalez said. “When I got my first win as a trainer, in the picture Benny Perkins is there. He ran in the same race and was fourth. He said, ‘This is the first of many, many more.’ It was a great day.”

Perkins was right. Gonzalez earned the first of his six MJC titles when he tied for the lead at Laurel’s 2014 winter meet with 19 wins, also capturing its fall meet that year. He led Laurel’s winter stand again with 20 wins in 2015, ranking second overall with 53 wins in Maryland, and was fifth overall in 2016 with 43 victories.

Last season was a breakout year for Gonzalez in Maryland. He relocated full-time from New Jersey to start the year and after finishing second at Laurel’s winter-spring meet and third during the Preakness Meet at Pimlico, he ended 2017 leading Laurel’s summer and fall stands and the state’s overall standings with 84 wins.

Gonzalez captured his third straight MJC title at Laurel’s winter-spring meet to open 2018, including a four-win day March 18. He is also the two-time defending training champion at the Maryland State Fair Meet in Timonium that bridges Laurel’s summer and fall seasons, this year scheduled for Aug. 24 – Sept. 3.

“It is not just me. I have a good team. I have very good assistants, riders, hotwalkers, grooms, everything. We are one team and they do a great job,” Gonzalez said. “All my owners understand, if you put the horse in the right spot you have a great chance to win the race. That is the key for me. If they’re in the right race, then they can win.”

To date Gonzalez’s best horse has been Afleet Willy, a 5-year-old Wilburn gelding he claimed for $25,000 Dec. 27, 2015 and turned into a multiple stakes winner of more than $555,000 in purses. Four of his five stakes wins have come at Laurel, most recently in the John B. Campbell Feb. 17.

“It’s a dream. You can only dream that. I never thought that I would be able to win that many races in such a short time. It will only be six years in the business in November and I’m almost to 500 winners. It’s hard to believe because it’s not easy,” Gonzalez said.

“It’s amazing. All the time I look and see where I was and where I am now, and I think it’s like a dream,” he added. “Where I come from, it was very hard. Nobody gives you nothing. You always have to work hard and I appreciate every day I have to be able to do this. Now I can take care of my family and be happy. It’s very good.”

For his career, Gonzalez owns 483 wins and more than $12 million in purse earnings from nearly 2,400 starts. He currently has 40 horses at Laurel including promising 2-year-olds Day, Absolved, Helen, Girls Love Me and Tybalt, runner-up in the Tyro Stakes Aug. 4 at Monmouth.

“Maryland is a special place to me. Here is the future for me,” Gonzalez said. “When I came here I didn’t know anybody, but when they first took my picture I said, ‘I know I can do it anywhere.’ I am proof that if you work hard, and if you believe it, you can make it.”