Canada's horse of the year scores in Grade 2 Autumn Stakes 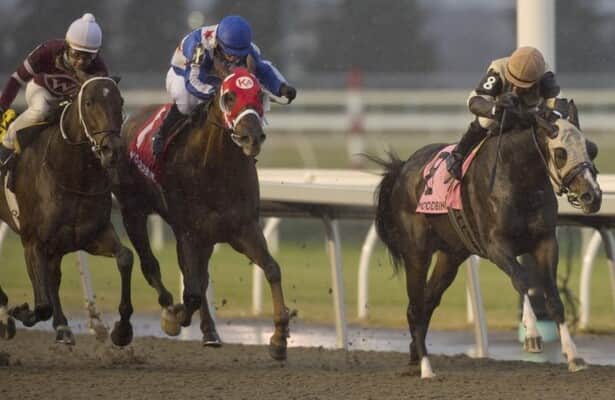 Mighty Heart, confidently handled by Patrick Husbands, returned to the winner’s circle with a front-running score in the Grade 2, US157,588 Autumn Stakes on Sunday at Woodbine.

Trained by Josie Carroll for owner-breeder Lawrence Cordes, Canada’s reigning horse of the year came back from losing a shoe in his last outing when he was fourth in the Durham Cup (G3). He rebounded with a stellar showing in the 1 1/16-mile main-track feature Sunday.

Husbands and Mighty Heart, racing from the outside post in the field of seven, burst out of the gate and went straight to the lead. Long shots Embolden and Primo Touch dueled in behind the pacesetter through an opening quarter in 23.86 seconds.

Mighty Heart was one-length clear after a half-mile timed at 47.23 seconds as Embolden held a head advantage over Primo Touch, who was running in third, eight lengths ahead of his nearest rival.

#8 Mighty Heart wins the the G2 Autumn at Woodbine, trained by @jcarrollracing, ridden by Patrick Husbands! Congrats to the connections!

Up next is the Rainbow 6 from Del Mar, tune in to TVG now for live, on-site coverage, and get involved at https://t.co/nBYFHj6ufh! pic.twitter.com/3kEaQv8lXl

The one-eyed son of Dramedy was up to the task and easily fended off any challenges, finishing three-quarters of a length in front of 2019 Belmont Stakes winner Sir Winston. Special Forces was third and Halo Again finished fourth. The final time was 1:42.51.

A rainy, cold day in Toronto did not dampen the enthusiasm of those gathered in the winner’s circle. They gave the 4-year-old colt and his connections a rousing ovation throughout post-race celebrations.

“Actually, last time (Durham Cup) was the first time I rode this horse, and Josie told me to play it by ear,” said Husbands, who notched a record fifth Autumn triumph. “I had a lot of horse throughout the whole race and then by the three-eighths pole, he just paused on me, and I just couldn’t get him going again. Looking at this race today, from my heart, I’m putting this horse in the race. When I walked out of the paddock, Josie said, ‘Put this horse in the race.’ I said, ‘God bless.’ Today, I put him in the race and he showed he was a true champion.”

“This is an exciting horse,” the Canadian Horse Racing Hall of Fame inductee said. “They don’t come along very often, horses like this. He had his handicap to overcome and things like that never faze on him. He’s just a good horse and he’s an exciting horse. He had a legit excuse last time when he a lost a shoe halfway around the turn and really felt vindicated to see him come back today and do what we’ve been expecting him to do.”

Cordes was equally effusive in his praise of Mighty Heart, who has his own Instagram page and a fan base that spans the globe.

“The dream continues, once-in-a-lifetime horse without question,” said Cordes. “He has followers from 6-year-old children to adults sending him paraphernalia in the mail, not addressed to me. It’s to my home address, ‘Attention, Mighty Heart.’ It’s incredible what’s gone on.”

Mighty Heart paid $9.20 for the Autumn win. It was the sixth lifetime victory from 15 starts for the Ontario-bred champion, who could make a start at Gulfstream before the end of the year.