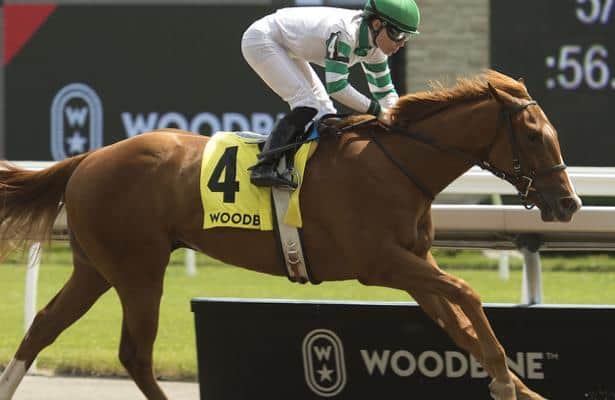 “Going into his first race, we really liked him,” the Woodbine-based Phillips said last week. “But to see him to run like that, that’s something that doesn’t happen very often. That’s pretty special.

“Then to see him come back and do it again, I was wondering, ‘Are we dreaming?’

Keep On Truckin so far has been everything Phillips and her team could’ve imagined.

The son of Society’s Chairman was bred in Ontario by Tim Meeuse & Arika Everatt-Meeuse. Phillips bought him as a yearling in a Canadian-bred sale for $85,217.

George Ledson is the main partner in the group that owns Keep On Truckin along with son Brian and Anderson Farms Ontario Inc.

Ledson started the Cavalier trucking company, based near Toronto, and the horse’s new owners picked a name that paid homage to his industry.

“George had a few nicknames,” Phillips said. “We tried his nicknames, and nothing was working.

“So Brian called us up and said, ‘What about Keep On Truckin?’ and I said, ‘That’s a fabulous name.’ So we submitted it, and it was available. The rest is history.”

Keep On Truckin trained well leading up to his first start, and went to the gates a 3-4 favorite in a maiden optional claiming field of 10.

Under jockey Eurico Da Silva, Keep On Truckin sped to a clear lead in a five-furlong sprint on Woodbine’s all-weather track. He led by 6 1/2 lengths at the top of the stretch, then drew further away to win by 11 3/4.

The leading Canadian jockey Da Silva gave up the mount on Keep On Truckin for another runner, Meyer. That jockey change planted seeds of doubt in Phillips’ head.

“I thought, ‘Well, maybe we’re wrong,’” Phillips said. “’Maybe he’s not what we think he is. Maybe he’s not that horse,’ which he appeared to be.

“Then of course he went out and did the same thing all over again. Validating, I guess, is probably a good way to put that second race. It was a lot of fun.”

New rider Emma-Jayne Wilson sent odds-on favorite Keep On Truckin straight to the lead of the 5 1/2-furlong stakes. The gelding put the field away quickly – again leading by 6 1/2 lengths at the top of the stretch – and won by 7 3/4.

A 92 Beyer figure further validated Keep On Truckin’s sparkling performance. So far this season, only two freshmen, Dennis’ Moment (97) at Ellis Park and Eight Rings (94) at Santa Anita Park, have topped that number.

“As I was looking at the fractions, I didn’t expect him to be quite so aggressive,” Phillips said. “I guess both races, watching the fractions, you’re like, ‘Oh boy, slow down, easy, not yet, wait.’ …

“But it seemed very easy for him. He just seemed to enjoy it and kind of pull away.”

Phillips said Keep On Truckin comes from a turf miler pedigree. She’d like to try that distance and surface with him Sept. 15 in Woodbine’s Grade 1, $250,000 Summer Stakes.

That event’s winner earns a “Win and You’re In” berth to the Breeders’ Cup Juvenile Turf, scheduled for Nov. 1 at Santa Anita Park.

“It’s a very exciting possibility,” Phillips said of the Breeders’ Cup, “and something that would be a big thrill for everybody.”

Of course, if Keep On Truckin continues the form he’s shown so far, he’ll enter his 3-year-old season with high expectations.

Phillips said that, true to the gelding’s name, she’s going to let Keep On Truckin forge his own path.

“We’re just going to see where it all takes us,” Phillips said, “and let him do the driving.”