Can blinkers give Hot Rod Charlie an edge in the Whitney? 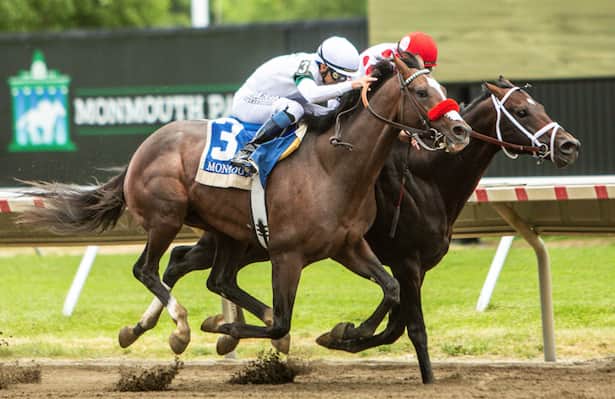 Trainer Doug O’Neill hopes the decision to equip ultra-consistent Hot Rod Charlie with blinkers will be a difference-maker in the Grade 1, $1 million Whitney Stakes on Saturday.

He has used the equipment before in an attempt to enhance focus. Hot Rod Charlie’s most recent start, in the June 18 Salvator Mile (G3) at Monmouth Park, convinced O'Neill that the 1 1/8-mile Whitney would be the ideal time to put blinkers back on.

The dark bay son of 2013 Preakness winner Oxbow appeared to have won a scintillating duel with Mind Control when he stuck his head in front at the furlong marker. He might have thought his job was done at that late stage. His foe was too game for that, however, and Mind Control was the one with his head in front when they flashed across the finish line.

“He got a little bit lost, a little bit distracted,” the West Coast-based trainer said. “We’re hoping a small set of blinkers will solve that.”

Not that there is much wrong with the 4-year-old’s results. He boasts $5,151,200 in earnings and failed to hit the board in only four of 16 career starts. Owners Boat Racing, Gainesway Stable, Roadrunner Racing and William Strauss cannot help but think of how more impressive his resume would be if he did not have five runner-up efforts to go with four wins.

Hot Rod Charlie finished second in the March 26 Dubai World Cup (G1) after winning his prep race in the Middle East. He endured a notorious miss in last year’s Haskell (G1) at Monmouth Park, when he was disqualified for interference and placed last. Blinkers had been removed for the Haskell.

No Whitney runner will have a margin for error. Olympiad, a winner of all five starts this season, seeks to give Hall of Fame trainer Bill Mott his first Whitney triumph. No rival has come closer than two lengths in any of those five races. The son of Speightstown has swept both of his starts at the Whitney’s nine-furlong distance.

Todd Pletcher, another Hall of Fame conditioner, will send out a tremendous trio in Life Is Good, Americanrevolution and Happy Saver. Life Is Good, overpowering in the Breeders’ Cup Dirt Mile last November, is virtually certain to set the pace. Americanrevolution also can be right there if he improves on the July 2 Stephen Foster (G2), when he finished 2 1/4 lengths behind Olympiad in the most recent start for both horses. Although Happy Saver is winless in his last five races, he has never been worse than third in any of his 10 outings.

The stakes are high. Beyond the lion’s share of the $1 million purse, the winner receives a fees-paid berth in the Breeders’ Cup Classic at Keeneland.

“It is salty, a really, really tough bunch. When you’ve got a tough horse like Charlie and Olympiad and Life Is Good, you are going to face each other in these Grade 1, 'win and you’re in' type of races. Everyone in there realizes that the waters are deep, but we all think we can win. We’re no exception.”

Despite the narrow Salvator Mile loss, O’Neill feels that was beneficial. “The race at Monmouth was a really key race to dust off the cobwebs from Dubai. That was crucial,” he said. “Since then, he’s maintained a really strong series of exercises. He really seems like he’s coming into it in great shape.”

Hot Rod Charlie revved up for the Whitney with five works at Keeneland, beginning with a four-furlong move in 49.60 seconds on July 4. In the most recent drill, he traveled five furlongs in 1:02.80 on Aug. 1 before shipping to Saratoga.

O’Neill knows his colt will need to step up his game for the Whitney. Thus the return to blinkers.

“It’s one of those that, as much talent as he has, as much grit as he has, we’re trying to get him to focus and try to separate himself,” he said. “Sometimes he’ll get there and then kind of go in neutral a little bit and gallop out strong. I’m just trying to maintain that grit he has and help Flavien get to the wire first.”