Can He's Had Enough Put it Together in Florida? 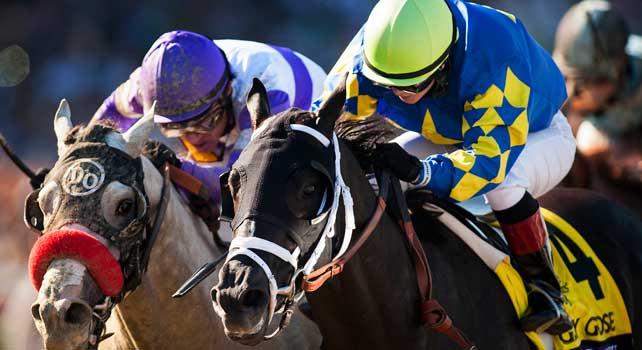 “He’s settled in great, ate up and gets over the track well,” said Jack Sisterson, assistant to trainer Doug O’Neill. “Now, the horse and the staff have to get used to the humidity here.”

He’s Had Enough is owned by J. Paul Reddam, who visited the Kentucky Derby and Preakness winner’s circles last year with I’ll Have Another, who was named 2012 3-year-old champion at the Eclipse Awards celebration at Gulfstream Park Jan. 19.

Mario Gutierrez, who rode the O’Neill-trained I’ll Have Another in his two Triple Crown successes, has been named to ride the son of Tapit, a $200,000 yearling purchase at the 2011 Keeneland September sale.

“Team Reddam is moving forward,” said Sisterson, the 28-year-old native of Durham, Eng., who attended the University of Louisville on a soccer scholarship and graduated with a degree in equine administration.

He’s Had Enough has been somewhat inconsistent during his six-race career but has shown flashes of promise at times, including a debut victory at Del Mar last summer and a close-up second-place finish to Shanghai Bobby in the Breeders’ Cup Juvenile (G1) at Santa Anita in November.

“He’s just a horse mentally, if he puts his mind to it, can do whatever he wants. You notice the blinkers (he wears),” said Sisterson, who briefly worked for trainers Todd Pletcher and Eddie Kenneally before moving to the Southern California circuit four years ago. “He’s a very playful soul. I think over time he’ll grow out of that and become more focused. The blinkers help him stay more focused.”

“Looking back at his Keeneland race, he got a bad trip and was stuck behind horses and had to check, as well as in the Breeders’ Cup. He had to check behind Shanghai Bobby and he put in a good performance there,” said Sisterson, who has worked for O’Neill for two years. “In the CashCall, did he like the surface? We haven’t determined that, but we’re not making any excuses for him. In the Bob Lewis, Flashback is a talented horse in a short field. We had to take him out of his game to put him up on the pace and use him a little more in the early stages of the race, but he came out of all his races sound and in good shape.”

The Besilu Stables Fountain of Youth, which offers 50 points to the winner in the Road to the Derby Points Standings that determines the 20-horse Kentucky Derby field, offers a golden opportunity for He’s Had Enough and his 10 rivals to earn a ticket to Louisville on the first Saturday in May.

“We expect a big performance from him Saturday. We know he has the talent. Obviously, it’s tough shipping down here with the top trainers and 3-year-olds that have been competing down here,” Sisterson said. “But if we want to move forward with his future, he’s got to be running in this and be competitive in the Fountain of Youth.”

He’s Had Enough was accompanied on the plane Tuesday and during training hours Thursday morning at Gulfstream by Lava Man, the retired O’Neill-trained gelding who earned more than $5 million after being claimed for $50,000 in 2004. Lava Man, a Grade 1 winner on dirt and turf who captured three Hollywood Gold Cups, two Santa Anita Handicaps and a Pacific Classic, is scheduled to be the featured guest Saturday morning during “Breakfast at Gulfstream. Lava Man has adapted well to serving as a stable pony to the stars in the O’Neill stable, including I’ll Have Another last season.

Although Lava Man attracted much attention at Churchill Downs and Pimlico last spring, I’ll Have Another managed to upstage the popular gelding with his Derby and Preakness performances.

“To this day, I can’t believe that that actually happened. When you watch replays, it sends shivers down your spine,” Sisterson said. “It’s a once-in-a-lifetime thing. Once you’ve experienced it, you want to go back and experience it again. It just makes you worked a little harder to get back.”