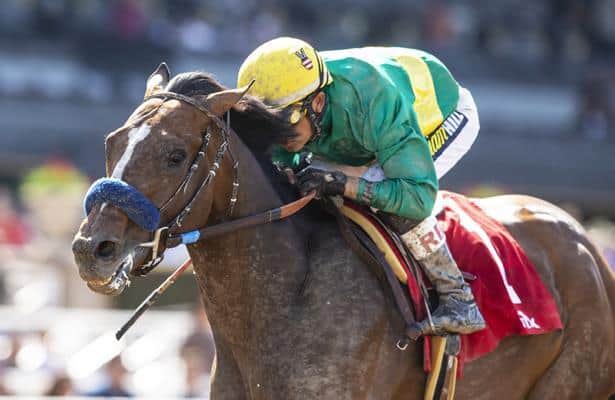 Fourth eight days ago in the Santa Anita Handicap (G1), Woodford Racing’s Campaign, who was about nine lengths off the lead when the field crossed the finish line for the first time in Sunday's Grade 3,, $100,000 Tokyo City Cup, rallied five deep turning for home en route to an impressive 3 ¼-length victory.

Trained by John Sadler, Campaign got the marathon mile and one half Tokyo City distance in 2:34.73.

With stablemate Acker going to the early lead, Campaign was content to lag far back for the first mile and was on the move with about eight lengths to make up at the half mile pole. Favored Beach View collared Acker a furlong out, but Campaign was in high gear and drew out from the sixteenth pole home.

“The race set up perfectly, and coming back on short rest, you have to be really careful with that,” said Sadler. “I don’t do it very often, but I thought this was a case where I could do it. Turning for home I felt pretty good, because he’ll run all day. He’s a true stayer."

“I had a lot of confidence in this horse today, because I’ve ridden him in his last two races,” said Bejarano. “In the Big ‘Cap, he didn’t have any pace to run at. Today, he was very relaxed and he was full of run going into the far turn. I didn’t want to try and go inside, because I know this horse likes to make a run on the outside.

“At the top of the stretch, I was about two or three lengths behind Beach View and I was very confident.  John’s done a great job with this horse and I want to thank him for the opportunity.”

Next to last heading into the far turn, Beach View, with Flavien Prat up, accelerated nicely leaving the three-furlong pole, took the lead in mid-stretch but was no match for the winner.

Acker, ridden by Victor Espinoza, finished 1 ½ lengths in front of Arch Prince and paid $2.20 to show while off at 2-1.