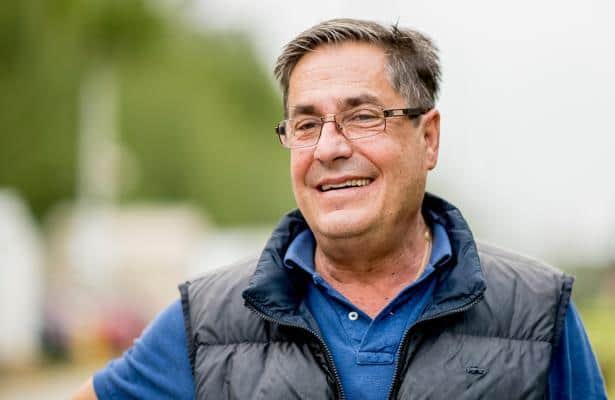 Most recently fourth in the Grade 1 Santa Anita Handicap this past Saturday, trainer John Sadler’s Campaign, a two-time winner in Kentucky at marathon distances on turf, looms dangerous as a late threat in Sunday’s Grade 3, $100,000 Tokyo City Cup at 1 ½ miles over Santa Anita’s main track. Run as the San Bernardino Handicap prior to 2005, the Tokyo City Cup has attracted a field of five older horses.

While Campaign, a 4-year-old colt by Curlin, will be making his third start for Sadler, 6-year-old Beach View, a Grade 3 winner five starts back at 1 ½ miles on dirt, will be making his 13th start for Leonard Powell and looks like a logical choice in the Tokyo City, as he comes off a second place finish in the Grade 2, San Luis Rey Stakes on March 29 at 12 furlong son turf.

While both Campaign and Beach View will both likely be trying to run from off the pace, Sadler’s most recent acquisition, Acker, who was haltered for $62,500 out of 3 ½-length allowance win over a sloppy main track here on Jan. 31, figures to be on or just off the early lead on Sunday and could pose an elusive target as he stretches out three eighths of a mile.

Supplemented at a cost of $1,500, he appears on the improve for Sadler as he was beaten 5 ½ lengths by top handicap horses Gift Box and McKinzie going a mile and quarter in the Big ’Cap last Saturday. A dedicated deep closer who had been based in Kentucky with Steve Asmussen, Campaign was transferred to Sadler following a disappointing 10th in the Grade 3 Sycamore Stakes at Keeneland. In his Southern California debut, Campaign rallied from far of the pace to take a second condition allowance by a neck going 1 1/16 miles over a sloppy track on Feb. 3 and although he just ran one week ago, Rafael Bejarano, who had won four in a row on Acker, will stick with Campaign on Sunday.

A 6-year-old full horse by Giant’s Causeway, he has recency and proven ability at the distance in his corner. Fourth, beaten 2 ½ lengths while pressing the pace 10 starts back in last year’s Tokyo City Cup, Beach View has proven ability coming from off the pace as well and it will be up to Flavien Prat, who replaces Bejarano, to play the race as it comes up on Sunday.  While Campaign returns to action on seven days’ notice, Beach View will have had 15 days between starts and could well go favored as he seeks his second graded stakes win in what will be his 15th career start.

Although he’ll get tested for class, this 5-year-old Include gelding is razor sharp at the moment, having won four in a row for trainer Peter Miller when claimed out of a second condition allowance score for $62,500 on Jan. 31.  With Victor Espinoza ticketed to ride for the first time, Sadler will hope to “have ’em surrounded,” as Acker should be sent by Espinoza, while Campaign will hope to have a lively pace to run down from far back.