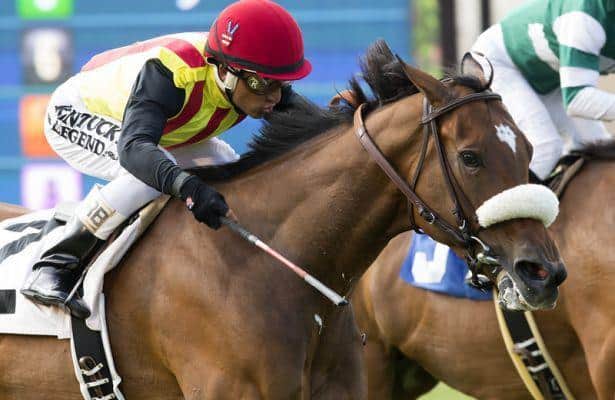 Sobradora Inc has had but two starts in the United States and drew the extreme outside (14) post in Saturday’s Rodeo Drive Stakes at 1 ¼ miles on turf, but Simon Callaghan is optimistic the four-year-old Argentine-bred filly will give a good account of herself.

“They went very slow last out (in the John C. Mabee at 1 1/8 miles on grass where Sobradora Inc finished a close fifth),” the trainer said. “We got a little far back and nothing really opened up when she needed it.

“Stretching out to a mile and a quarter is going to help . . . I’m not overly concerned about the outside draw. She’s training well and I expect her be in the mix at the end.”

Sobradora Inc captured the restricted Osunitas Stakes at 1 1/16 on turf in her U.S. debut, Aug. 7 at Del Mar.

MACHOWSKY IN BOTH HALVES OF EDDIE D. STAKES

Mike Machowsky entered a horse in each half of the split Eddie D. Stakes on opening day, Why Two in first division (race six) and Secret Primero in the second (race nine). Why Two, a gelded son of Bob and John, won his last two starts at five furlongs on Del Mar’s turf course, the most recent being in the restricted Green Flash.

The Eddie D. is a Grade III event offering $100,000 in purse money and will be decided at about 6 ½ furlongs on Santa Anita’s unique downhill course.

Machowsky expects Why Two to fancy the added distance. “You never know,” the trainer said, “but he’s won going seven-eighths, he’s won going two turns, so the distance should be good for him. It’s a tough race. There’s a lot of speed in there.”

Eddie Delahoussaye will be on hand to present a trophy to the winning connections of the races named in his honor.

“It would be very special to receive the trophy from him,” Machowsky said. “He’s one of the greatest of all time. You could put him on any type of horse when he was riding, whether it was a two-year-old or an older horse going a mile and quarter. He could win on any of them.”

Friday marks another opening, another show for Ron McAnally. The legendary Hall of Fame trainer hasn’t missed an opening at Santa Anita going on seven decades, when he started here in 1948.

Much has changed in that span, but McAnally remains as active as can be at age 84, still making annual trips to South America in search of another Paseana or Bayakoa, and still attending stateside sales such as the recent one at Keeneland in Kentucky. Currently, he has some 25 head at Santa Anita.

“I came here in 1948, then spent two years in the service and they were the only two years I missed,” McAnally recounted from his customary seat at Clockers’ Corner. “In those days I was a groom and a hot walker, and worked my way up.

“After I got out of the service, I started all over again. In 1948 I was mucking out stalls where Paddy Gallagher is stabled now (Barn 68). At the barn on the opposite side there was a little tiny guy also mucking out stalls.

"I thought at the time, ‘This guy should be exercising horses, not mucking stalls.’ But the policy in those days was for a trainer to have a rider under contract and he would teach the boys from the bottom up.

“When I got out of the service, I read newspaper headlines about this guy riding all these winners and I wondered who it was. I went to the barn and looked at this jockey on the horse and it was Bill Shoemaker. The rest is all history. He was one of the greatest riders I’ve ever seen.

“That was the beginning of my career, and after that I worked my way up, claiming a horse or two at Hollywood Park. I did pretty good with them and kept getting more and more clients. Nowadays, owners want to give their horses to young guys with no experience, instead of the old guys with a lot of experience.

“You’ve got to work your way up and be lucky to have a good horse. It’s the horses that make the trainers, owners and jockeys. If you’ve got the right horse, you can do it. I’ve had a lot of good horses, especially with Elmendorf Farms. They would send me 20 horses every year and they were either stakes horses or allowance horses.

“Later on, along came John Henry, Bayakoa, Paseana, Candy Ride and on and on, but I feel very fortunate. Everybody says, ‘When are you going to retire?’ and I don’t think I ever will, because the horses have been good to me and the least I can do is be good to them.”

FINISH LINES: The first 2,500 fans in attendance at Santa Anita Friday will receive an attractive California Chrome poster while supplies last at one of two locations, either in the Club House or outside of Champions Gift Shop in the East Paddock Gardens . . . Personal reasons have kept Angela Hermann home in Minnesota this season. Hermann, who recently finished up as the track announcer at Golden Gate Fields, was scheduled to join Santa Anita’s simulcast team this Autumn. Masochistic, early favorite for the $1.5 TwinSpires Breeders’ Cup Sprint on Nov. 5, worked five furlongs in a bullet 1:00.40 for Ron Ellis Thursday. “Beautifully done,” said clocker Toby Turrell of The Yellow Sheet . . . Multiple graded stakes winner Om, prepping for the Grade II City of Hope Mile on turf Oct. 8, worked five furlongs on the main track Wednesday in 1:01.20 for Dan Hendricks. Gary Stevens was aboard . . . Victor Lebron makes his Santa Anita debut on Friday. The 32-year-old native of St. Croix in The Virgin Islands has been riding 11 years at ports of call such as Monmouth, Belmont, Florida and Kentucky. “I always wanted to ride in California,” said Lebron, who tacks 113 pounds and will be represented by agent Dudley Osborne . . . Santa Anita offers attractive and potentially game-changing guaranteed exotic wagering pools during the Autumn Meet, notably: $300,000 Late Pick 4 on opening day; $750,000 Late Pick 4 and $100,000 Pick 6 this Saturday, Oct. 1; $500,000 Late Pick 4 and $100,000 Pick Six Sunday. Oct. 2; $300,000 Late Pick 4 Thursday, Fridays and Monday, Oct. 10 following opening weekend; and $500,000 Late Pick 4 and $100,000 Pick 6 Saturdays and Sundays following opening weekend . . . In partnership with the California Retirement Management Account (CARMA) and the California Art Club (CAC), Santa Anita will host a fine art exhibit beginning Friday through Saturday, Oct. 22 in the west entrance to the track’s Club House mezzanine. The exhibit will be on display Friday through Sunday, Oct. 16 and all items will be available for purchase, with 20 percent of the proceeds allocated to CARMA-sponsored Thoroughbred aftercare initiatives. Fans may pre-purchase tickets to the Oct. 22 reception for $75 each online at santaanita.com/events. Tickets include admission to the Chandelier Room, entry to the art exhibit, Club House admission, buffet-style gourmet fare, valet parking and racing program. For inquiries regarding artwork, visit californiaartclub.org or call 626-583 9009.