Calif. threatens to take half of jockeys' pay for misusing crops 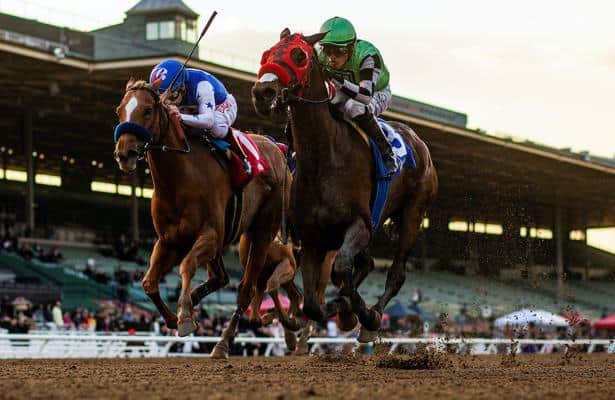 Nearly six months after the state enacted the most stringent riding-crop rules in the U.S., the California Horse Racing Board is set to discuss and possibly vote on a proposal that would significantly increase the penalties for infractions.

The proposed amendment to CHRB Rule 1688, Use of Riding Crop, could mean jockeys lose half their pay from any graded-stakes race if they misuse their crops. It will be taken up by the CHRB during its regularly scheduled meeting Tuesday. The agenda item is an enhancement of rules that took effect Oct. 1, which limits a jockey to a maximum of six strikes during a race and no more than two strikes in succession, all in the underhanded position.

While those restrictions would remain in place, Tuesday’s proposal would also add a subsection modifying the potential fines and suspensions for violators. The most notable of these changes would come in graded stakes. Subsection (f), as proposed, reads: “In graded stakes, if a jockey rides in a manner contrary to this rule, and finishes first, second or third, the stewards shall impose a fine equivalent to 50 percent of the jockeys’ earnings for that race.”

In an email exchange with CHRB executive director Scott Cheney, it was pointed out there is no longer a scale where the penalty increases based on the number of infractions, as had been the case prior to Oct. 1. Fines and/or suspensions are meted out solely at the discretion of the stewards after considering any potential mitigating factors.

“There is no scale of jockey penalties other than what is written in the rules, although we encourage stewards to apply them consistently,” Cheney wrote.

As expected, this latest proposal from the CHRB has drawn the ire of the Jockeys’ Guild. On Friday, Guild president and CEO Terry Meyocks and co-chairs Mike Smith and John Velazquez provided a letter to the board expressing the group’s opposition to the agenda item.

Smith on Saturday deemed the riding crop rules in California “crazy,” adding the time could come that "you’ll have nobody to ride here, period.

“They are going to get so severe, there will be a breaking point at some time,” Smith told Horse Racing Nation. “But what do we do about it? Anything is possible. I don’t really know what everybody is going to do or where everybody stands on it. If the majority of guys think it’s fine, then I guess it’s fine. If the majority doesn’t, then you’re going to have some problems. We’ll just have to see.”

To illustrate the extent of California’s crop penalties, Smith pointed to Robby Albarado’s recent three-day suspension for his winning ride aboard Swiss Skydiver in the Beholder Mile (G1) at Santa Anita for using an overhand strike.

“How guys can get a three-day suspension for what he did blows my mind,” Smith said. “It’s the so-called rules, I guess. It looked like he wasn’t even going to do it. But you could see she put her ears straight forward and you don’t know what they’re going to do. He was just getting her attention. Then, next you know, he got three days.”

Meyocks also cited Albarado’s suspension as regulatory overreach. He called it a sign that “people have lost their mind or are clueless.

“But I think it is a combination of both. That was way over the top,” Meyocks said to HRN. “Here’s a jockey that’s been riding for 30 years. The horse was getting ready to shy, ears pricked and all that. So you need to get their attention. I just don’t get it. We’ve lost all common sense in this industry.”

Who is behind this?

Meyocks went on to question who is behind the push to enhance crop penalties in California, adding he has an idea.

“If I had to guess, I would say it’s coming from the Breeders’ Cup, and you can quote me,” Meyocks said.

This year’s two-day Breeders’ Cup, with its lucrative purses, is set for Del Mar on Nov. 5 and 6.

In response to Meyocks's speculation, the Breeders' Cup provided HRN with the following statement:

“While it is our understanding that this initiative was generated independently by the CHRB, the proposal to increase fines for riding-crop violations in graded-stakes races aligns with the model uniform rule for which the Thoroughbred Safety Coalition members, including Breeders’ Cup, Churchill Downs, Del Mar, Keeneland, NYRA and the Stronach Group, are advocating in our respective state racing jurisdictions.

As pointed out by both Smith and Meyocks, the guild's position is the maximum number of strikes allowed during a race in California may not be ideal, but it is acceptable. At the forefront of the critique is the seeming dismissal of jockeys' input by the CHRB for best practices, most notably the restriction to an underhanded-only position. The guild deems the rule potentially unsafe for horse and rider and simply an overreaction to critics, “who want our industry to die," according to Meeks.

“The jockeys have bent over backwards 98 percent of the time trying to do the right thing,” Meyocks said. “We changed the popper. Horses are not getting cut up and abused. We’ve said all along if someone abuses a horse, they should be punished, they should be sit down. We have no problem with that.

“But don’t you think stewards have more to be doing, for the integrity of the game, than counting each jock and how many times?" Meyocks added. "If it's egregious, that's a different story. But these fines and suspensions are the most severe in the country.”

The CHRB will meet via teleconference Tuesday at 12:30 p.m. EDT. The meeting may be streamed at www.chrb.ca.gov under “Webcasts.”

How to play the Gallant Bob with odds-on Jackie's Warrior
Although this blog hates short prices, the Grade 2...