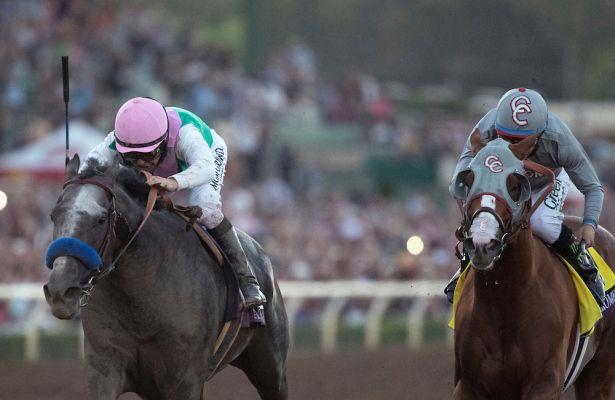 FINISH LINES: With Southern California weather back to normal (no rain), there were 265 recorded workouts this morning, including 39 on the training track. Both surfaces were labeled “fast.” . . . Tamarack Bay is the dam of three California Cup runners Saturday, notes Jon White, Santa Anita’s morning-line odds maker. “Tamarando and Ward ’n Jerry in the California Cup Turf Classic and Six Point Rack in the California Cup Derby are all offspring of Tamarack Bay,” White said. “As a broodmare, Tamarack Bay has a terrific record. Tamarando is a Grade I winner. In addition, he has produced Luckarack, a multiple stakes winner, and U’narack, a stakes winner. Ward ’n Jerry, Six Point Rack and Luckarack are by Lucky Pulpit, the sire of California Chrome, twice voted Horse of the Year (2014 and 2016). Tamarack Bay’s sire is Dehere, an Eclipse Award winner in 1993 as champion 2-year-old male . . . Santa Anita hosts a trackside wine festival Saturday featuring delicious food and wine tasting throughout the day. To purchase tickets, visit santaanata.com/events . . . Congratulations to Chad Lindsay on winning his first race of the meet Thursday with his 16th mount aboard Good N Naughty for trainer Hector Palma. The three-year-old California-bred filly captured the first race by 8 ¼ lengths at a $9.40 win payoff. “That was an easy ride, a nice ride,” said the 23-year-old Texas native, who is represented by agent Brandon O’Bryan. “There’s a lot of competition out here, a lot of new faces, and a lot of big faces that have been here a while, but I finally got the monkey off my back.” . . . Evin Roman, an 18-year-old apprentice from Puerto Rico, is scheduled to make his United States and Santa Anita debut early next month. A graduate of Escuela Vocacional Hipica, Puerto Rico’s state-run jockey academy that produced world class riders Jose Ortiz and Irad Ortiz, Roman rides in Puerto Rico on Feb. 5, arrives in California the next day, and will be on horses at Santa Anita Feb. 7, according to his agent, Tony Matos, who also represents Santiago Gonzalez.