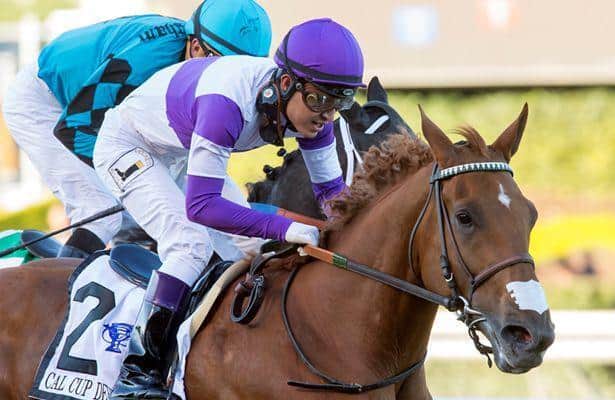 Friday’s $150,000 Real Good Deal Stakes is the first of three stakes for California-bred horses at that purse level that will provide food for thought for horseplayers overall and support for the Grade I events later on the weekend cards.

Ann Arbor Eddie, winner of the California Cup Derby in January, tops a field of seven 3-year-olds in the seven-furlong Real Good Deal Stakes. Trainer Doug O’Neill will be seeking his third Real Good Deal win with the son of Square Eddie owned by J. Paul Reddam, but his first since back-to-back scores in 2004-05.

Saturday’s California Dreamin’, at 1 1/16 miles on the turf, goes as the third on a 10-race card, six events before the featured Bing Crosby. Hall of Fame trainer Jerry Hollendorfer has the two favorites, G.G. Ryder and He Will, in a field of six.

A victory in a “Win and You’re In” Challenge series race, of which there are 81 from January to October, guarantees a spot in a Breeders’ Cup race and other considerations.

Here are the horses who have qualified to date.

There are three “Win and You’re In” qualifiers upcoming this weekend, two at Del Mar. Saturday’s Grade I $300,000 Bing Crosby Stakes leads to the $!.5 million TwinSpires Sprint and Sunday’s Clement L. Hirsch Stakes to the $2 million Longines Distaff.

The other “Win and You’re In” race is the King George VI and Queen Elizabeth Stakes at Ascot, which will feature Highland Reel, winner of the $4 million Breeders’ Cup Turf in 2016.

Del Mar clocking crew member Thom Mitchell and Emily Gullikson, a partner in and handicapper for OptixEQ Equine Analytics, will be the guests providing selections and comments at the upcoming Weekend Handicapping Seminars.

Mitchell will be featured in the Saturday program while Gullikson will be the guest of Scott Shapiro on Sunday.

The seminars are held from 12:45-1:30 at the seaside terrace near the top of the stretch.

A 2-year-old colt sired by Kentucky Derby winner Animal Kingdom out of the mare Alyssum went for $180,000 to top the Barretts Paddock Sale following the races on Wednesday. The colt was consigned by Excel Bloodstock (Bruno De Berdt) Agent and purchased by Steve Gasparelli.

Two others from 43 that went through the ring commanded six-figure prices. Two-year-old filly Duck and Cover went for $140,000 to B.B.A. Ireland and an unnamed colt by Uncle Mo went to trainer Jeff Bonde for $100,000.

CLOSERS -- Jockey David Flores has announced that he will retire from riding after this weekend and move to Ocala, Fla., to work on a farm and a possible future career as a trainer. Flores, 49, a native of Tijuana whose career started at the Agua Caliente track there, won the 1999 riding title here with 38 victories, capturing four of the track’s Grade I events that year … Three Del Mar trainers celebrate birthdays today: Alexis Barba, 65, Rafael Becerra, 63, and Kristin Mulhall, 35. It’s a working birthday for Becerra, scheduled to saddle Cupid’s Bow in the first race and Mulhall, who has Cayate in the fourth … If you lost money on Arrogate in the San Diego Handicap, be consoled by the fact you’re in good company. Tuesday, on The Late Show with Stephen Colbert, guest Charlie Rose talked of his weekend trip here for “60 Minutes,” and spending time with trainer Bob Baffert and jockey Mike Smith before Arrogate, the top horse in the world, finished fourth. “I bet a lot of money on him, and I lost a lot of money,” Rose said … Selected works from 116 on dirt and 11 on turf officially timed Wednesday, Dirt – American Anthem (4f, :47.60), Nagys Piggy Bank (4f, :46.80), West Coast (6f, 1:12.80), Avenge (1 mile, 1:39.80; Turf – Desert Steel (3f, :34.40), Cambodia (5f, :58.40), Flamboyant (5f, 1:02.60) and Om (5f, 1:01.00).