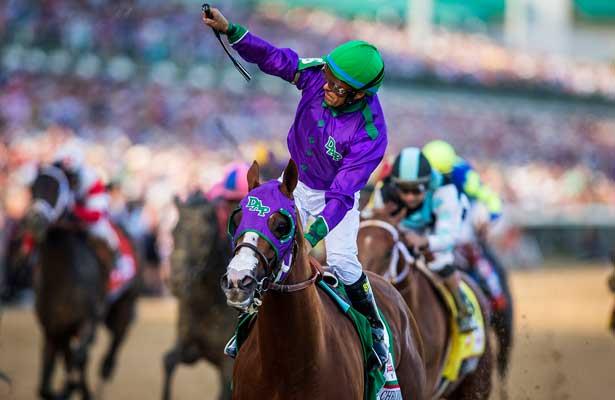 Cilla, the first U.S. starter for dual-Classic winner and two-time Horse of the Year California Chrome, hit the board on debut in the opener at Delaware Park on Monday.

Finishing third in the five-furlong sprint on the main track for 2-year-old fillies, the Louisiana-bred daughter of California Chrome trained by Brett Brinkman was the 4-1 third choice in the win pool in the first of eight races on the Delaware Park card.

In the $40,000 maiden special weight affair, Cilla earned $4,400 for owner and co-breeder P. Dale Ladner. Brinkman is also listed as breeder of the filly out of Ladner’s broodmare Sittin At the Bar, a multiple stakes-winning and graded stakes-placed 11-time winner by Into Mischief.

California Chrome, the 2014 Kentucky Derby and Preakness Stakes winner, was named Eclipse Award Horse of the Year in 2014 and 2016. He was retired from racing after his ninth-place finish in the 2017 Pegasus World Cup at Gulfstream Park.

He initially retired to stud at Taylor Made Farm in Kentucky for a stud fee of $40,000. In November 2019, Taylor Made announced that the 50-member California Chrome syndicate agreed to sell the breeding rights to a Japanese company and he would relocate to Arrow Stud in Hokkaido.

Cilla was his first progeny to race in the United States. She finished behind race winner Moochie and post-time favorite Hipnotizada.

*Rating is based on HRN fan votes, which rank the Top Active Horses in training.
California Chrome