California Chrome may not be done racing after Pegasus World Cup 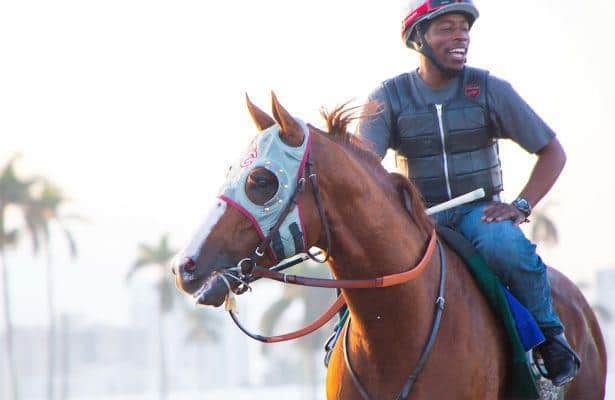 Victor Espinoza, who journeyed worldwide aboard California Chrome on a path to gold and glory that has reaped $14,084,600, could ride the great California-bred in his final race next Saturday in the $12 million Pegasus World Cup Invitational at Gulfstream Park—or not.

Espinoza has ridden California Chrome in his last 20 starts--14 of them victories--and is scheduled to be astride for the last time in the Pegasus, after which the immensely popular six-year-old chestnut son of Lucky Pulpit is to be retired at stud on Jan. 29, standing for a $40,000 fee at Taylor Made Farm’s 1,000-acre spread in Nicholasville, Kentucky.

But in an interview with Espinoza this morning and in a press release quoting Frank Taylor, vice president of boarding operations at Taylor Made, the door was left open.

“It’s been a great ride,” said Espinoza Saturday morning at Clockers’ Corner, surrounded by the verdant scenery burgeoning in the foothills of the San Gabriel Mountains, an ever-refreshing landscape.

“It was just an amazing time and I wish I could find another one like California Chrome. It seems impossible, but you never know. I’m getting ready for the Pegasus but I really don’t know if that’s going to be his last race or he’ll run again.

“I think it all depends on how he runs Saturday. So far, the plan is for this to be his last race, but if he runs a big race, they might change their minds, because he’s doing so good.”

California Chrome worked five furlongs at Gulfstream Saturday morning in 58.81 under Dihigi Gladney, with fractional times of 23.66 and 35.12, with a six furlong gallop out of 1:12.41.

Taylor noted in a release that “discussions recently took place about not retiring California Chrome after the Pegasus, and instead pointing him to the Dubai World Cup (March 25), a race he won in 2016 after finishing second in it the year before.

“I thought maybe two or three weeks ago there was a chance, but we polled everybody and there were a few people who didn’t want to run. We’re in the position where we have all these mares booked to him and we bought a lot of mares to breed to him; it was kind of hard to turn back. I was really campaigning to do that.

“The reason I want to run him is because he’s sound or better today than when we started in January. He’s just getting better and better. With the Pegasus World Cup and the Dubai World Cup ($10 million) there is so much money. If he were to (win) and do good (this year), he could make $15 million.

“He made $8 million (in 2016). He’s just getting bigger and stronger. He’s just amazing. He’s the closest thing I’ve seen to a machine in a horse.”

Espinoza didn’t have to have his arm twisted to concur.

“He’s better than before, so I don’t really know exactly if this will be his last race,” Victor said. “If it is, it will bring a lot of memories, not just for me and my career, but for the Art Sherman team and all of Chrome’s fans.

“California Chrome has just been an awesome ride for everyone.”

PROMISING APPRENTICE WINS FIRST RACE AT SANTA ANITA: Ruben Fuentes, a seven-pound apprentice rider from New Mexico, won his first race at Santa Anita Friday when he piloted I’ll Wrap It Up to a 4 ¼-length victory for trainer Steve Miyadi in the fourth race for $10,000 claimers at seven furlongs.

“We’ve had five mounts and in our last four, ran fourth, third, second and first in a row,” said his agent, Mike Ciani, who also represents Gary Stevens. “He’s a great kid and he really has some talent. His dad (Miguel) is one of the best riders in Mexico City. Ruben’s brother is a rider, his four uncles are riders. It sounds like the line from ‘My Cousin Vinny,’—‘My Dad’s a mechanic, my uncles are mechanics . . .’”

Friday’s victory was the 18th in four months for the18-year-old Ruben, a native of New Mexico who “speaks perfect English and tacks 110 pounds. He has his ‘bug’ until late November. Gary and (his brother) Scott are pretty much the ones who brought him here.

“The guys in the (jockeys’) room have been great with him, (Rafael) Bejarano and of course Gary. (Martin) Pedroza came up to him and said he liked what he saw.”

STEVENS PROGRESSING FROM HIP SURGERY: Looking fresh and fit as he recuperates from surgery last Dec. 21 for replacement of his left hip, Gary Stevens was on hand at Clockers’ Corner Saturday morning, counting down the time until he can resume his Hall of Fame career.

“I’m doing well,” Stevens said. “I’m rehabbing every day, back on my Equicizer which I’ve been riding for about 10 days now. I see the doctor in two weeks and hopefully I can start getting on horses in 3 ½ more weeks.

FINISH LINES: There was one winning Single Ticket Pick Six Jackpot ducat Friday at Santa Anita, worth a whopping $272,515 . . . There were 78 recorded workouts Saturday on Santa Anita’s dirt training track, 14 of them horses trained by Doug O’Neill, 12 by Phil D’Amato and 10 by Keith Desormeaux . . . Kent Desormeaux and Mario Gutierrez are at Golden Gate Fields today where they ride Vending Machine and So Conflated, respectively, in the $100,000 California Derby. Desormeaux, a superior mudder, won two races on Santa Anita’s wet/fast track Friday giving him 10 for the meet, good for third in the standings behind Tyler Baze (16) and Flavien Prat (15) . . . The California Horse Racing Board will conduct its regular monthly meeting 9:30 a.m. Thursday, Jan. 26, at Santa Anita. An audio-only webcast of the meeting can be heard through a link on the CHRB website.The Medication, Safety and Welfare Committee will meet 11 a.m. Wednesday at the same location. The public is encouraged to attend these meetings. The Board agenda and supporting package of materials are available on the CHRB website, as are those for the Medication Committee.