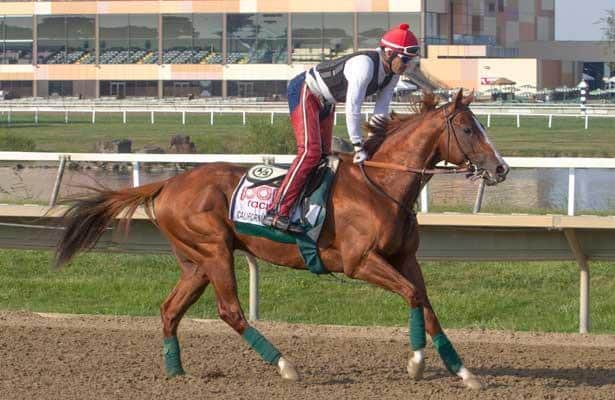 After having a slow mile jog over the Parx surface Wednesday morning, Kentucky Derby and Preakness winner California Chrome, owned by Steve Coburn and Perry Martin, had a more vigorous morning on Thursday, galloping between a mile and a half and a mile and three-quarters, again with exercise rider Willie Delgado aboard, as he prepares for Saturday’s running of the G2 $1,000,000 Pennsylvania Derby.  He initially came to the paddock to school and was then taken to the track to get his work in.  In the eyes of assistant trainer Alan Sherman, all went well.

“He was striding out nicely today,” said Sherman.  “I thought he handled the track real well.  He schooled great, looked around, taking everything in.  I thought yesterday when he jogged, he looked around a bit, but today, I thought he was more focused.  He’ll gallop again tomorrow and I think he’ll be even more focused tomorrow.”

In a race of this caliber, even the smallest miscues could prove costly and California Chrome has had issues in the past at the start.  He’s also breaking from the inside post.  “He likes to rock in the gate,” remarked Sherman.  “It’s something he’s always done and we have to deal with it.  We’ll school him at the gate tomorrow.  There’s a couple of speed horses in the race and we hope to maybe be sitting third.  We want to make sure we get off the rail and don’t get trapped.”

Having not raced in more three months, a $5 million purse and an expected date with Shared Belief looming in the Breeders Cup Classic in six weeks, Sherman was asked about the significance of the race Saturday for California Chrome.  “Obviously the ultimate goal is the Breeders Cup Classic.  We want to get a good race out of him on Saturday and we certainly hope he wins – nobody likes to lose – but yes, the ultimate goal is the Classic.”

Kaleem Shah’s G1 Haskell winner Bayern, trained by Bob Baffert, will most certainly pose a speedy threat to California Chrome’s chances on Saturday and the stout looking son of Offlee Wild spent some time in the paddock after getting in a morning gallop of a mile and three-eighths.  Composed and professional in the paddock, assistant trainer Jim Barnes has liked what he’s seen from his colt this week.  “He’s a super good traveler,” said Barnes, as Bayern, like California Chrome, flew in the west coast on Tuesday.  “I couldn’t be happier,” he continued.  “He moves over this track real well.”

Bayern was schooling with Baffert’s G1 Cotillion entrant, Zayat Stables’ Jo Jo Warrior.  The multiple graded winning daughter of Pioneerof the Nile galloped a mile and a quarter today and was cool and relaxed as well.  A low key Barnes remarked simply, “She looks great.”

The two Winchell horses, Untapable (G1 Cotillion) and Tapiture (G2 PA Derby) arrived from Saratoga this morning, and according to assistant trainer Scott Blasi, the trip was decidedly and thankfully uneventful.  “They shipped real well,” he said.  “It was an easy trip from Saratoga.  Both just walked the shedrow (Parx).  Tomorrow they will have a little gallop in the morning and school in the paddock around 10AM.”

CRK Stable’s Candy Boy, trained by John Sadler, was also on the track again Thursday preparing for the Derby.  He jogged once around the mile oval with exercise rider Jose Lopez.  “He is a lot more happy, feeling good,” said Lopez.  “More frisky. So far so good.  I expect to have a good race.”