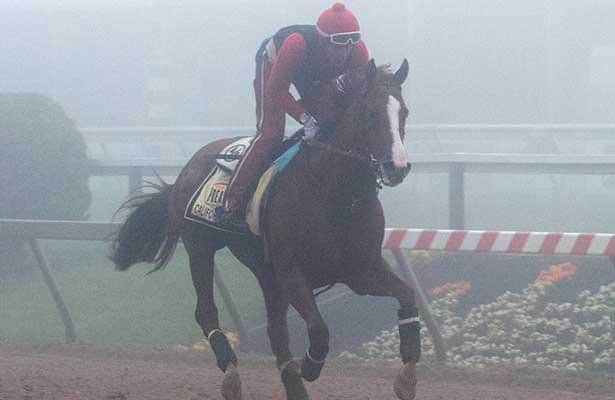 California Chrome: Freak of Nature, or throwback to arguably the greatest turf horse ever bred on American soil.

They questioned his ability to get a mile and a quarter; he got it. They wondered if he could transfer his brilliance to turf; he did and with an effort emulating that of one of greatest California breds to date, Swaps. So the question is, where do we give credit for this Dual Classic and Grade 1 Hollywood Derby winner’s brilliant turn of foot and diverse range of talent?

This is one man’s answer to the question.

To begin with I became curious about Chrome's pedigree during his races leading up to the Kentucky Derby. Moreover, while a lot of the questions surrounding Chrome's abilities were centered around his dam, it appeared that his topside bore a very similar look to that of one the most fashionable lines in the county. Most notably, that of the outstanding sire Tapit, because California Chrome's sire, Lucky Pulpit, was also a son of Tapit’s sire, Pulpit. My reasoning was that it would not be too great a stretch of one’s imagination, to believe that Chrome should have the same possibility for greatness as any son of Tapit.

However, then there’s CC's mare. An unheralded daughter of the Maryland-based sire Not for Love, that had managed only to win one race, and that an $8,000 maiden claiming event at Bay Meadows.

It was not until Chrome's win in the Hollywood Derby Saturday that I noticed a name in his lineage that had previously escaped me.

This brings me to a personal part of this story, and why that name I saw leads me to this opinion.

During my time spent as a trainer there is one horse that was undoubtedly the best I was privileged to have in my care. His name, Vernon Invader.

Owned and bred by William J. Smith of British Columbia, Vernon Invader (Ringside-Pacific Invader by Welsh Legend), or Rocky as was his nickname, first entered my barn in the fall of 2000.

As a two and three-year-old in 1997-1998 Vernon Invader was on a romp, with notable wins coming in the Preview, New Westminster, Juvenile Breeders’ and Ascot Graduation Stakes at Hastings Park in Vancouver, BC during his two-year-old season.

Moreover, at three he was victorious in the City of Vancouver, Klondike, and British Columbia Cup Stallion Stakes, all at Hastings Park. He also won the BC and Alberta Derbies, and had a second place finish in the Eagle Garden and Hardware Derby at Emerald Downs, although he would be disqualified from those positions at Alberta and Emerald Downs.

Rocky’s most notable drawback came in the way of a clubfoot, a problem in my mind that stood between his not having been the highest money earner ever bred in British Columbia. Had he not had that clubfoot, however; I would never have had the opportunity to train him!

During his time at Hastings Park, Vernon Invader had raced while in the care of Alex Murray, an immigrations lawyer and longtime associate and friend of his owner William J. Smith.

Bill, as I called him had brought some horses to New Mexico in 1999. That is where I became a part of the team. We, Bill and I, had done well at Sun Ray Park and Turf Paradise that year, and when we returned in 2000. Bill made the decision to bring Rocky with us, believing the change to the dryer environment could benefit his foot.

Moreover, with the addition of a glue-on shoe, at my recommendation, and applied by the renown Northwest based farrier, Ben Gibson, it did.

His first race for us would come in the New Mexico State Fair Handicap where he would face a son of Falstaff by the name of Brew. Trained by Johnnie Jamison, Brew had won virtually every Stakes race for thoroughbreds contested at a distance beyond a mile in New Mexico for the last two years. As I watched the horses approach the gate that day, I overheard racing legend, Casey Darnell, mention that it was his opinion that they should just give purse to Brew, since there was no real threat to beat him.

Not only did Rocky provide that threat he notched his second of only two wins in that year. We would win several other smaller Stakes with Vernon Invader in the four years following, although the foot problem was a constant battle, and he could never replicate his perfomences of his early career. He would later be euthanized due to the complications of foundering at his place of birth in Vernon, BC.

However, how does this relate to California Chrome you are asking? Here’s how, I stated earlier that I had noticed a name in Chrome's lineage that had escaped me, that name belongs to none other than the incredible Amercan bred turf horse, Sir Ivor. CCs’ grandsire three times removed and also Vernon Invaders grandsire once removed in having been the sire of Ringside.

Along with having Sir Ivor in their lineage, California Chrome and Vernon Invader have another thing in common. They have both been referred to as being freaks of nature. I have heard that term used to describe both of these outstanding horses. Perhaps the overachievements by both can be attributed to their ties to Sir Ivor.

Not a name you are going to find in many American bloodlines Sir Ivor (Sir Gaylord-Attica by Mr. Trouble) was named as the United Kingdom HOTY in 1968. His Timeform rating was 135 that year.

Moreover, he was the leading sire of broodmares in both Britain and Ireland in 1983. Not surprising when you consider that his sire, Sir Gaylord, was a half-brother of possibly the most influential broodmare sire in America, Secretariat.

Sir Ivor himself, was foaled in Kentucky but was sent to train under the care of Vincent O’Brian. While in his care, Sir Ivor claimed victory’s in some of Europe’s most prestigious races including the 1967 Grand Criterium and National Stakes at two.

His rider, the talented Lester Piggott, described Sir Ivor as “the greatest horse I’ve ever ridden” after his victory in the Epsom Derby. It should also be noted that Sir Ivor was able to win six consecutive races before finishing third to Royal Palace in the Eclipse Stakes at Sandown and second to Vaguely Noble in the Prix de l’Arc de Triomphe.

In retrospect, I do not feel that these horse are ‘freaks of nature’ at all. Instead, perhaps they are simply products of a bloodline that, while not prominent, can produce an extremely talented racehorse when it surfaces.