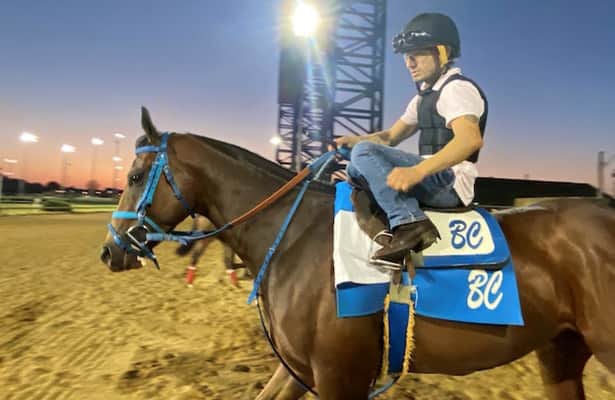 Calhoun’s two 3-year-olds come in with somewhat similar form, both having raced four times and improving with each start.

Mr. Wireless, a son of 2011 Florida Derby winner Dialed In and out of a mare by the deceased Super Derby winner Arch, finished fifth in his debut sprinting. Put in longer races, Mr. Wireless won an Oaklawn Park maiden and an allowance race by a nose, then was second in the Texas Derby by three-quarters of a length at 14-1.

“He loved the two turns,” Calhoun said recently at Churchill Downs. “Really impressive races. He’s a very, very gutsy horse. He’s got a lot of try to him. He ran very well in the Texas Derby, a sloppy mess there. He got away just a hair tardy and that put him in bad position going into the first turn. He got fanned pretty wide and got beat a half-length or so. I think if a couple of things here and there had gone a little different that he might have won. He was good enough to win that race. We’re hopeful he can step up a little bit and fit in these graded stakes.”

By contrast, Mr. Money already had won a pair of graded stakes at Churchill Downs before coming to Indiana Grand.

“Obviously Mr. Money was a much more proven horse going into the Indiana Derby,” Calhoun said. “I trained this horse’s half-sister, and that family develops a little later. They’re a little slow maturing physically. I think you’ll see more and more from this horse in the future. He’s going to get better and better.”

Lovely Ride was a well-beaten second in her debut racing 4 1/2 furlongs at Lone Star Park. She followed with a professional maiden victory and even better-looking allowance triumph at Sam Houston before taking a Churchill Downs’ second-level allowance by 6 1/2 lengths. Off that, Bill Downes has made Lovely Ride the 4-1 third choice in the Indiana Oaks’ field of 11 3-year-old fillies, behind favored Kentucky Oaks third-place finisher Will’s Secret and Santa Anita Oaks (G2) winner Soothsay.

“Interesting filly,” Calhoun said of Lovely Ride. “Very pretty filly that’s got quite a bit of pedigree. We started her off at Lone Star, and she was just an average second that day. She had some issues bugging her at the time, so we gave her plenty of time off. She was a little bit immature physically as well. We started her back on an easier trail. Ran her at Houston, and she ran very well. So, we brought her to Churchill, and we felt pretty good about our chances going into the allowance race.

“I know she’d never faced anybody, really, and been running on a much softer circuit. Nobody gave her much of a chance here. There were some pretty good fillies in there, been running in graded stakes, coming in thirds and fourths. It was a very good test for her, and she passed with flying colors. So, we’re pretty hopeful she can step up in graded-stakes company as well. She hasn’t done much wrong in her life, and she’s thriving right now.”

Among the fillies Lovely Ride defeated in her last start was Indiana Oaks contender Moon Swag, who before that was third in the Fair Grounds’ Rachel Alexandra Stakes (G2) and fourth in Keeneland’s Ashland (G1).

Thomas purchased the Tiznow broodmare Lovely Lil while she was carrying Lovely Ride, making him the breeder of record.

“Everybody says I don’t know how to spell patience,” he said with a laugh. “But I have patience with my horses and know they need time here and there. So, we gave her the right time, brought her back nice and easy. She annihilated the field, not once but twice before we brought her to Kentucky to do the two-turn thing. That was a nice race she won at Churchill.

“We’re excited to be going to Indiana. We got lucky and won the Indiana Derby. Now we can hopefully get lucky and win the Indiana Oaks. That would be pretty cool. It’s going to be nice to be back at the track, now that things have opened up again.”

Thomas said he was offered “some pretty serious money” for Lovely Ride after her last victory.

“I felt like she had bigger and better things to do, that she would accomplish,” he said. “So, we decided to hang on to her. Hopefully we made the right decision. We’re very hopeful she’ll win a graded stakes. That goes hand in fist. When you start winning graded stakes versus allowance races, especially with fillies, they become more and more valuable. It’s already worthwhile. Bret calls them my pets, but it’s always nice to see these homebreds do well.”