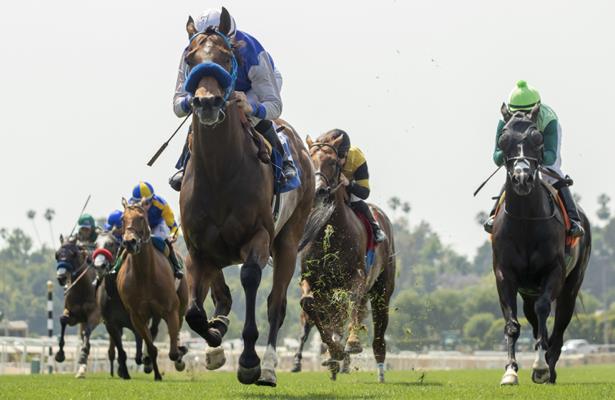 Under patient handling, California-bred Eddie Haskell rallied late to take Saturday’s Grade 3, $100,000 Daytona Stakes by 1 ¾ lengths under Kent Desormeaux at Santa anita Park. Trained by Mark Glatt, who took the 6-year-old gelding by Square Eddie nine starts back for a $50,000 claiming tag, Eddie Haskell got five furlongs on the Santa Anita turf in 55.49.

Breaking from post position three in a field of seven 3-year-olds and up, Eddie Haskell was in the middle of a three-horse scramble for the lead heading into the far turn.  At that point, Agapito Delgadillo, aboard What’sontheagenda, who was to the outside of both the winner and Kanthaka, opened up by about 2 ½ lengths leaving the three furlong pole, only to be collared in deep stretch.

“After about a hundred yards (out of the gate), I sent ‘Eddie’ to quicken the pace and Agapito came with me, then he finally pushed the button and cleared off, it made it really nice for the mount that I had. He’s just phenomenal, when I pushed the button, he gave me whiplash, popped a wheelie and took off and went after the leader.”

Owned by Philip Wood and Jim Hailey, Eddie Haskell, who was bred in California by Reddam Racing LLC and is out of their Boston Harbor mare Teresa Ann, was making his first graded stakes appearance and picked up $60,000 for the win, increasing his earnings to $453,107. A perfect 2-for-2 now at five furlongs on the Santa Anita grass, “Eddie” now has seven wins from 10 overall tries under these conditions and has an overall mark of 20: 8-2-5.

"He’s a top horse going five-eighths (on turf),” said Glatt. “He won throttled down today, man. That was impressive. I wasn’t worried about where he was early. I thought I was running the best horse. He’s learned to come from a little bit off the pace and I think it’s even made him a little better horse going five furlongs.

“It was cool…We just hope we can keep him healthy and take it race by race and if he gets us to the Breeders’ Cup in the end of the year, I’m sure we will take a shot.”

Ridden by Flavien Prat in his first start on turf, Kanthaka eased off the speed duel into the far turn and hit his best stride late. Off at 4-1, he paid $2.80 while finishing 2 ¾ lengths in front of Brandothebartender.