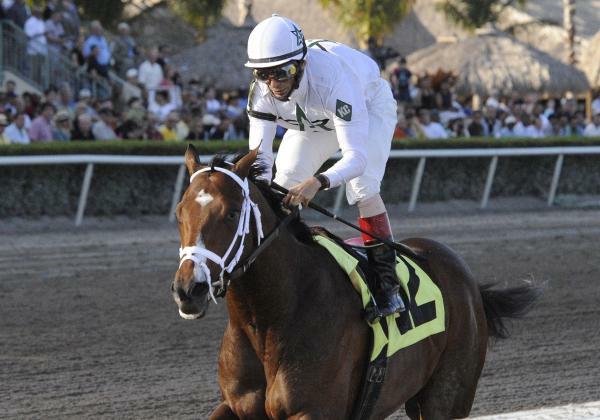 Cal Nation, trained by Todd Pletcher and owned by WinStar Farm, graduated by open lengths under a hand ride, running seven furlongs in 1:22 flat. The 3-year-old son of Distorted Humor, out of A.P. Indy mare She's A Winner, retaines the services of John Velazquez and has worked four times at Palm Meadows since his romping bow.

Bowman's Causeway cuts back to a one-turn mile after a troubled 4th in the Fountain of Youth. Paco Lopez hops aboard for trainer Patrick Biancone and the Ontario-bred was impressive in his Feb 11 maiden breaker at nine panels. He set the pace and was clearly second best at this course/distance on Jan 30.

Cal Nation's stablemate Dance City dueled through quick splits in the local slop and held on at a mile and an eighth Jan 11. He figures to be part of the pace under Castellano.

I'm Steppin' It Up might be the one to catch but has not been seen since chasing Uncle Mo in the Champagne last fall. He sports a local five furlong bullet for this engagement.

Rusty Arnold sends out Cane Garden Bay. His lone win in five outings was at Keeneland and  the Spectacular Bid Stakes show finisher dons the hood for this.

Red Hills rounds out the field. He earned his diploma in a flat mile affair at Calder and makes his first start since November for a cold barn.