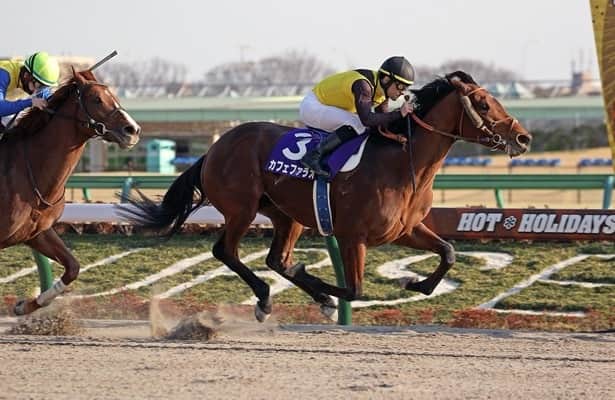 The Breeders’ Cup Challenge is an international series of stakes races whose winners receive automatic starting positions and fees paid into a corresponding race of the 2021 Breeders’ Cup World Championships, which is scheduled to be held Nov. 5-6 at Del Mar.

As a part of the benefits of the Challenge Series, the Breeders’ Cup will pay the entry fees for Cafe Pharoah to start in the 1¼-mile Longines Breeders’ Cup Classic. Breeders’ Cup also will provide a $40,000 travel allowance for all starters based outside of North America to compete in the World Championships.

Trained by Noriyuki Hori and ridden by Christophe Lemaire, the 4-year-old Cafe Pharoah, the 3-1 favorite, completed the 1-mile in 1:34.40. In defeating 15 rivals for his first career Group 1 victory, Cafe Pharoah improved his overall mark to five wins in seven starts. Out of the More Than Ready mare, Mary’s Follies, Cafe Pharoah was bred by the late Paul Pompa Jr.

Absent of fans and cheers, the 38th running of the February Stakes, the first Group 1 event of the Japanese racing season, was on its way on the backstretch with Air Almas, Helios and Wide Pharaoh fighting for the lead. As Helios slipped back in the early stages, Cafe Pharoah, breaking from stall three, stalked the two frontrunners while saving ground before smoothly angling out right beside them to enter the lane in third. From there on, Cafe Pharoah unleashed a powerful stretch drive, securing the lead by the furlong marker and held off the fast-closing 35-1 Air Spinel.

“His condition was super, and I had confidence already at the paddock,” said Lemaire, who also won last year’s February Stakes on Mozu Ascot. “We decided to use cheek pieces (headgear strips similar to blinkers) hoping for a more aggressive performance. His start was good, we were positioned well, and he responded beautifully. The colt has such high potential. I had no doubt that he could land a G1 win if he gave his best. I’m happy that it all worked out today.”

Air Spinel was settled on the rail in mid-division and struggled to find room in early stretch. Once he angled out, finding a clear path 300 meters out, he finished fast, overtaking the tiring pacesetter in the final sixteenth and threatening the winner. Wonder Lider, sent off at 19-1, took an economic route behind the winner up to the last turn and displayed a powerful stretch drive furiously chasing the runner-up to the line while holding off a strong challenge by 6-1 third choice Red le Zele for third. Air Almas finished fifth, followed by Inti, the 2019 February Stakes winner, in sixth.

In 2020, Cafe Pharoah won twice at the race distance over the Tokyo track, taking the two Kentucky Derby qualifying races, the listed Hyacinth Stakes and the Unicorn Stakes (G3). He suffered his first defeat as the favorite in the Japan Dirt Derby on July 8 at Ohi, finishing seventh. He rebounded on Oct. 3 to win the 1 3/16-mile Sirius Stakes (G3) at Chukyo. In his final start last year, Cafe Pharoah stepped into Group 1 company for the first time, in the 1 1/8-mile Champions Cup at Chukyo on Dec. 6, finishing sixth.