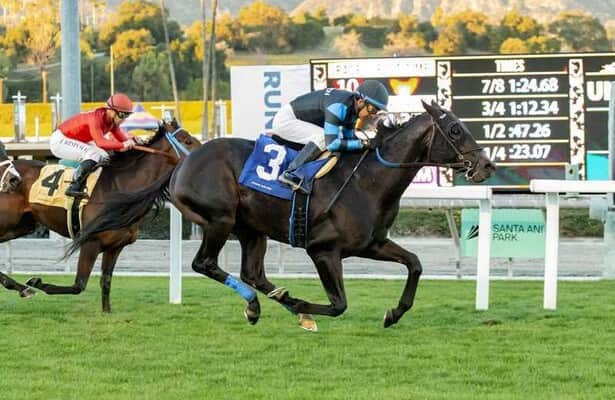 Trained by George Papaprodromou, who swept Sunday’s late double, Cabo Spirit came back from a close third Nov. 28 going a mile on the turf in the Cecil B. DeMille (G3) at Del Mar to get the mile Sunday in 1:36.38.

“First of all, I can’t thank enough Mr. Kretz for supporting me these past 10 years and thanks to all my help who do a great job keeping the horses happy and going like this,” Papaprodromou said. “I think the last time, he moved a little too soon, but what can you say? He ran a huge race that day too.

“What I did was put the cheaters (small blinkers) on him a little bit. Last time I had to put on the semis, and he couldn’t see the from the outside. He kind of got a little confused I think, but today he just ran great. He settled nicely on the backside an he did run huge at the end.”

“The turf is a little soft, so I figured if I go to the front, my chances wouldn’t be that great, so I decided to take him back a little bit and just let him run in the end,” said Espinoza, who has ridden Cabo Spirit in his last four starts, winning two. “It seemed like he really liked that style, and when I had a little room to let him run down the stretch, he opened up two lengths in no time.”

Ireland-bred Maglev, who made his U.S. debut, saved ground to the top of the lane but raced erratically late, finishing well as the 2-1 favorite under Umberto Rispoli and paid $4.40 and $3.20 while finishing a neck in front of Handy Dandy.

Handy Dandy, fresh off of an impressive one mile, maiden turf win Nov. 28, was attentive to the pace but lacked the necessary kick late. Ridden by Kent Desormeaux, he was off at 5-1 and paid $3.80 to show.