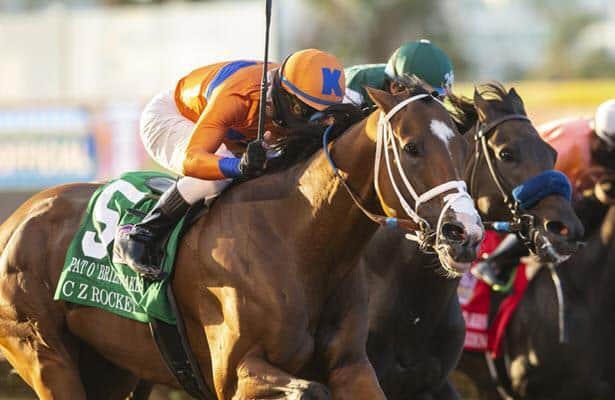 Nine of the fastest racehorses on the grounds will step on the accelerators at Del Mar Saturday for a six-furlong battle royale in the 76th edition of the Grade 1 Bing Crosby Stakes.

The race offers a $300,000 purse and, additionally - as part of the Breeders’ Cup Challenge Series - an all-expenses paid ticket into the $2 million Breeders’ Cup Sprint, which will be contested at Del Mar on Saturday, Nov. 6.

The Crosby is deep in talent, deep in contention and crack full of speed. Picking a favorite is tough, but Del Mar’s morning-line man, Jon White, had made a call for the running machine known as C Z Rocket and hung him at 5/2. To underline the extent of the friction that rises with a dash like this, White has put 7/2 listings on both Dr. Schivel and Brickyard Rice, as well as a 4-1 tab on Collusion Illusion, the race’s defending champion.

C Z Rocket has proven to be one of the great claims of recent times since he was haltered for his current connections by trainer Peter Miller at Oaklawn Park in Arkansas in April, 2020. The now 7-year-old gelding by City Zip has since run nine times – the last six in stakes – and won seven of them, along with a pair of seconds. In the process he’s banked more than $1 million and improved his career marks to 26-11-3-2 with total earnings of $1,391,641.

Dr. Schivel’s main claim to fame so far is winning the Del Mar Futurity last September, after which he was sold to his current outfit and sent to the barn of trainer Mark Glatt, who then put him on the shelf for nine months. The 3-year-old son of Violence made a comeback start in June at Santa Anita in an allowance race and won it in a photo.

Brickyard Ride is a seriously fast horse whose style is to go to the front and dare his rivals to come catch him. Trainer Craig Lewis has campaigned the 4-year-old by Clubhouse Ride both in California-bred races and against open company and has come away a winner in both circumstances. He’s captured eight of 16 starts and banked $464,477.